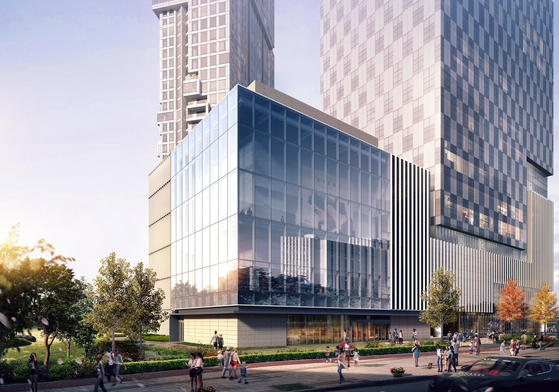 A 3-D rendered image of the new D Museum set to open in Seongsu-dong, eastern Seoul, next year.[D MUSEUM]


Korea's popular art museum D Museum will greet the new year by relocating to Seongsu-dong, eastern Seoul, near Seoul Forest from Hannam-dong in central Seoul, the museum announced on Tuesday.

The new location for the museum will be in a building near the Seoul Forest Station, Bundang Line, and will have an underground entrance straight from the station to inside the museum.

The museum will have two exhibition halls, one performance hall, a rooftop, an education center and a museum shop in the five-story building, covered with transparent glass walls to look over Seoul Forest and the Han River.

"The museum will be easier to access and we will expand our roles not only in exhibitions but also in performance and education as a cultural multiplex to give more people new experiences and inspire them through culture," the museum said.

The museum took in a limited number of visitors every day to abide by the government guidelines and will offer online content related to the exhibition on its official YouTube channel for those who didn't get a chance to visit in person.

The reopening date of D Museum will be announced in the coming days, taking into account the Covid-19 situation in the country.

Selfie with the first lady