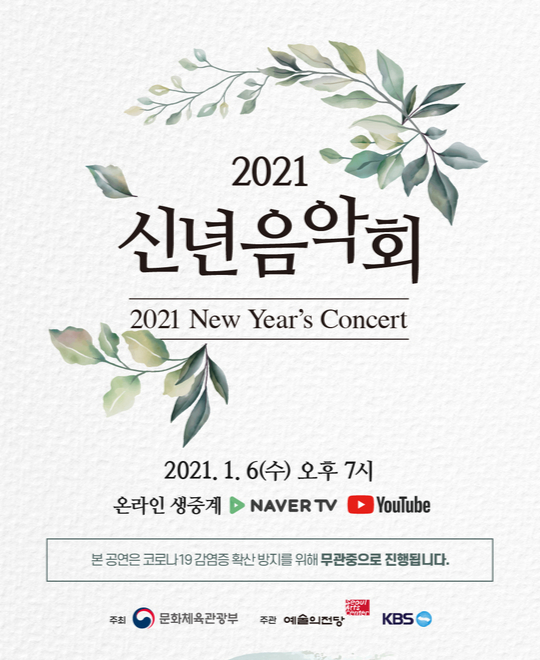 
The Ministry of Culture, Sports and Tourism will host an online music concert on Wednesday to welcome the new year and connect people through music amid the continuing Covid-19 pandemic. It will be held for free on various platforms for everyone to enjoy.

The concert, dubbed the “2021 New Year’s Concert,” is being organized by the Seoul Arts Center (SAC), which provided the venue for the musicians to perform at. It will be emceed by singer-songwriter Yoon Sang and announcer Lee Hyun-ju. Producer Han Bong-geun and sound director Choi Jin took part in directing the program.

The concert will begin with the Korean national anthem “Aegukga,” played by the KBS Symphony Orchestra and conducted by Year Ja-kyung. It will be followed by music used in governmental events which received positive feedback from viewers in 2020.

Baritone Lee Ihn-kyu will perform singer Lee Juck’s “Things We Took For Granted” (2020) to take a look at the things that are taken for granted and express hope to cherish ordinary life when things return to normal. Violinist Shin Zia will play Kim Hyo-geun’s “A Thousand Winds” (2017), a song played at the 70th commemoration event of the Korean War and “Going Home,” or “Symphony No. 9 in E Minor Op.95,” by Antonin Leopold Dvorak, which was played at the 65th Memorial Day ceremony.

Ballet dancers Kim Ji-young and Kim Ki-wan will put on a joint performance to the track “The Mission” (1986) by Ennio Morricone to symbolize people’s strong will to overcome a common crisis. Soprano Park Hye-sang will finish off the first part of the concert with “The Day” (2018) by Park Hyo-shin, which was featured on the original soundtrack for popular tvN drama “Mr. Sunshine.” The drama was set between 1900 to 1907 when Korea was under Japan's colonial rule (1910-1945) and is based on the history of liberation activists trying to protect the country.

The second part will begin with a prelude of the opera “Peppermint Candy,” which composer Lee Gun-yong newly wrote just for the “New Year’s Concert.” Pianist Kim Sun-wook, who became the youngest winner of the Leeds International Piano Competition in 2006, will play the fast-tempo “Piano Concerto No. 1 in G Minor” by Felix Mendelssohn to heighten the mood.

Conductor Year and the KBS Symphony Orchestra will finish off the concert with a message of hope for 2021 through the last song, “Symphony No. 9 ‘New World’” by Dvorak.

The orchestra kept the number of players to a minimum in accordance with the latest Covid-19 situation in Korea. The practice was also held at SAC’s concert hall to maintain a safe distance between those taking part. Everyone, except for singers and wind instrumentalists, wore masks and and transparent screens were placed between wind instrumentalists.

“The ‘New Year’s Concert’ was put together in hopes of consoling the people’s hearts and bring hope for the new year, and will be streamed live for the first time in its history,” the ministry said. “We hope to show the power of culture and arts by bringing the on-site emotions into the online environment and connect society.”

The concert will be streamed live through Naver and YouTube starting at 7 p.m. on Jan. 6.