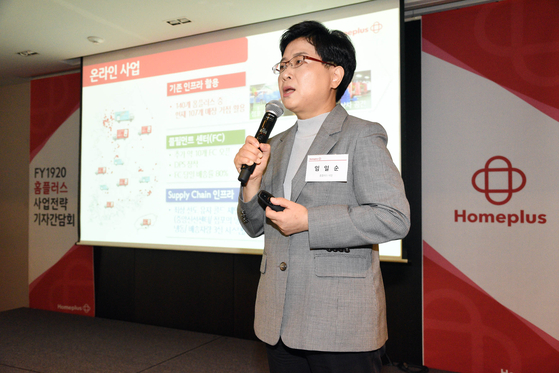 
Homeplus CEO Lim Il-soon is stepping down after more than three years in the top post.

Lim was the first female CEO at a major discount mart chain in Korea.

She expressed her wish to resign in the second half of last year for personal reasons, according to Homeplus on Thursday. Homeplus said that the company has requested her to stay several times, but recently decided to accept the resignation.

Lim will formally step down later this month.

Under her leadership, around 15,000 contract workers at Homeplus stores have been granted permanent employment status. Following the change, only 1 percent of its workers, or 228 employees, are employed on a contract basis, according to Homeplus.

Homeplus Special, which combines the prices of bulk discount warehouse retailers with a conventional grocery store experience, was one of the achievements under Lim.

Raising business transparency, focusing on the development of private brand products and establishing data-driven infrastructure are other achievements of Lim, according to Homeplus.

“Lim has transformed Homeplus into a future[-driven] retailer,” said a spokesperson for the retailer in a statement. “To minimize the gap, she has already completed the overall business strategies and directions for 2021.”

Homeplus said it is currently contacting a new potential CEO with retail experience and capabilities in online and offline channels.