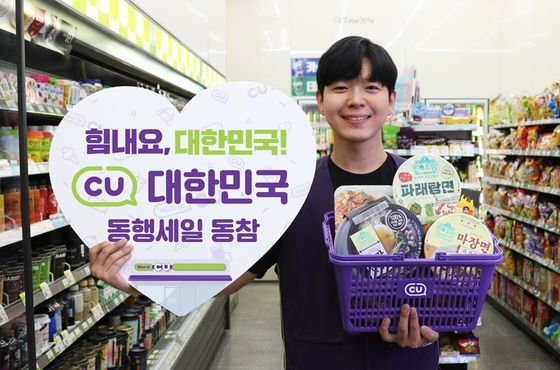 A model holding up a placard showing CU’s participation in the government-led promotion that runs from June 26 through July 12. [BGF RETAIL]


Retailers are rolling out promotions as their contributions to a government-led sales festival campaign designed to revive the local economy hit by the Covid-19 outbreak.


The promotions run from June 26 through July 12.

Discount mart chains, like Homeplus and Lotte Mart, and convenience store franchise BGF Retail announced the start of promotions this week with the hope of getting consumers to spend.

Homeplus announced on Wednesday it is offering up to a 50 percent discount on 9,600 types of products for two weeks from June 25 through July 8. The deals are available online and offline.

Domestic pork, abalone, squid and eel are some of the representative offerings from the retailer. One hundred grams (0.2 pounds) of pork from Jeju, for instance, will be sold at 850 won ($0.71), while 100 grams of abalone will be sold at 3,390 won. Five trimmed squids will be sold for 9,990 won.

Homeplus is unleashing 1,400 tons of summer fruits and vegetables, including watermelon, peaches and sweet pumpkins.

The retailer will be refunding 10 percent of the purchase price on household appliances with high electricity efficiency, like air conditioners and washing machines, and up to 40 percent on camping supplies.

“The volume of the promotion offered this week is not significantly greater than the promotions we usually offer,” said Anthony S. Lee, a spokesperson for Homeplus. It just held a 50 percent promotion event last week. “But giving consumers the idea that things are cheap everywhere could trigger them to open up their wallet that has been closed firmly since the coronavirus outbreak."

Lotte Mart is running the promotion for a week from June 25 through July 1 on fresh produces and processed food for Lotte members.

From June 25 through June 28, Lotte Mart is offering up to a 40 percent discount on prime Korean beef. One person can buy up to 2 kilograms (4.4 pounds).

From June 28 through July 1, Lotte Mart visitors can enjoy up to a 30 percent discount on beef. One hundred grams of refrigerated Australian beef, for instance, is sold at 2,380 won.

Three hundred types of wine are also on offer. They can be purchased at a 40 percent discount price.

The discount mart chain is offering up to a 50 percent discount on brands like Polham, Basic House and Shoe Marker.

Emart said some small- and medium-sized fashion companies have experienced sales drops of up to 40 percent on year following the Covid-19 outbreak. Up to 60 percent of their offerings are in inventory.

It is providing up to 500,000 won to the buyers of energy-efficient appliances.

“The promotion, held in the middle of the stagnant economy from the coronavirus, is expected to be a great opportunity to reverse the depressed sentiment for not just consumers but also manufacturers and retailers,” said Choi Hoon-hak, a spokesperson for Emart.

BGF Retail’s CU convenience store franchise is giving out coupons during the promotional period, offering consumers discounts that can be used that day.

But an industry source said retailers are suffering as it tries to offer consumers and manufacturers as much as possible.

“The government’s push to lessen the burden of manufacturers and suppliers by offering them a better price while offering consumers promotion is putting retailers in a difficult spot,” said the source who wished to remain anonymous.