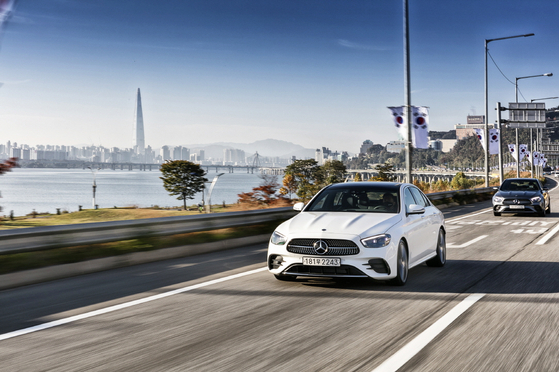 
It's hard to name a single shortcoming of Mercedes-Benz's recently face-lifted E-Class, suggesting that the vehicle that had dominated Korea's import car market for five consecutive years isn't likely to surrender its crown anytime soon.

When the Korea JoongAng Daily got behind the wheel of the Mercedes-Benz E350 from the AMG Line last month, the car offered above-average performance in ever aspect: From the feeling of driving it and the level of luxury to the connected car services, infotainment and performance.

The face of the car, especially the LED headlamps, has been noticeably upgraded, with a rounder and more horizontal shape, giving the car a mild demeanor. 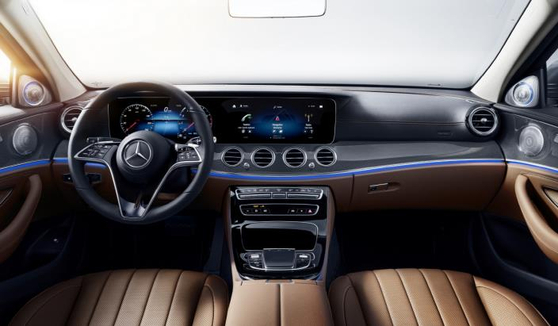 The interior of the face-lifted Mercedes-Benz E-Class. [MERCEDES-BENZ KOREA]


Inside, there are a number of features that haven't appeared in Mercedes models before.

The steering wheel comes complete with a touch pad that helps the driver control a menu that appears on the heads-up display as well as simple functions such as controlling the volume. All it took was an easy swipe of the thumb to operate, like playing with a smartphone.

The heads-up display was the most detailed this reporter has ever seen, with three divided sections on a single display.

The driver could categorize which type of information appears on which screen, such as speed, fuel efficiency and a simplified map.

For the first time for an imported carmaker, Mercedes-Benz has added augmented reality (AR) technology to its navigation system, although it is not completely new to Korean customers as Hyundai Motor already has a similar system.

The AR technology was precise enough to beat the longtime stereotype that imported cars don't carry navigation systems that can hack it in Korea.

Without turning on a separate app, the AR-topped navigation system guided this reporter through Seoul's roads pretty smoothly. When passing through specific neighborhoods, the navigation screen turned 3-D to offer a more realistic road view.

Another noticeable feature that made the car a whole lot more futuristic was its 12.3-inch wide screen connecting the digital cluster behind the steering wheel and an infotainment screen. There's not much functionality added from the extended screen, but the subtle upgrade offered a big change to the interior ambiance.

Performance-wise, it offered the same old reliable E-Class smooth and stable driving throughout the course. If the driver is feeling a little more dynamic, the Sport and Sport Plus modes boost the acceleration and add a bit more of a growl to the engine.

The vehicle is equipped with a four-cylinder M264 gasoline engine that can generate a maximum horsepower of 299 and torque of 40.8 kilogram-meters. It also comes with a 48-volt electric system dubbed the EQ Boost to add an extra 14 horsepower and 15.3 kilogram-meter torque when accelerating.

When something has been successful for as long as the E-Class has, there's a good chance that there is a lot more than luck involved. The new E-Class is an all-rounder, catering to consumers who prioritize design, performance, connectivity or luxuriousness.

But, they do need to have some cash.