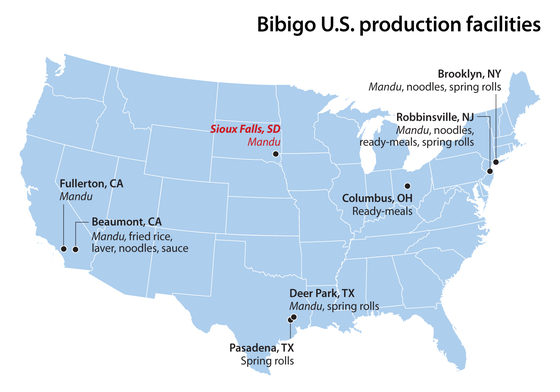 Food company CJ CheilJedang is building another mandu, or dumpling, production facility in the United States, aiming to have 70 percent of its overseas sales come from the U.S. market.

According to the company Tuesday, it plans to build a roughly 140-acre production facility in Sioux Falls, South Dakota. The new facility will be used to produce the company's Bibigo brand mandu.

Details of the new facility have not yet been decided, according to the company, but it will take some five to seven years to complete construction and build the necessary infrastructure.

The company currently has seven facilities in the United States producing Bibigo products: Two each in California and Texas and one each in Ohio, New York and New Jersey. Five of those plants currently produce mandu.

Currently, about 65 percent of mandu overseas sales are in the United States. The company aims to increase that number to 70 percent with the expansion of the production infrastructure.

In 2020, sales of Bibigo mandu globally totaled about 1 trillion won ($909.9 million). Of that, about 670 billion won came from overseas markets — and about 420 million won from the United States.

CJ CheilJedang also said it has been exerting efforts to enter as many U.S. retailers as possible such as Walmart, Kroger and Target as well as Food City and Hy-Vee.

The company also revealed its plan to make other Bibigo brand food products that can follow the success of the mandu. Bibigo’s Korean-style fried chicken, and gim, or laver, have shown great potential as they are familiar with customers overseas, having appeared in Korean dramas, webtoons and movies.

With hot sauce popular in the U.S. market, the company also plans to promote various Korean spicy sauces, such as gochujang, in the country.

“We will take a leap forward to become a global company by making the Bibigo brand one of the K-food global mega brands by spreading its popularity in North America to other overseas countries,” said CJ CheilJedang in Tuesday’s statement.