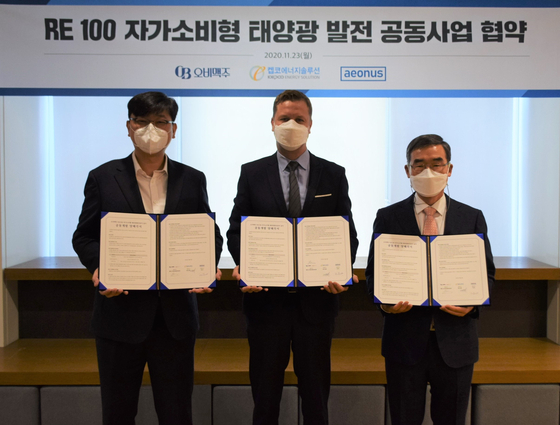 OB signed a memorandum of understanding with Kepco Energy Solution and Aeonus as the first step toward realizing the project, part of the global RE100 scheme.

Under the agreement, OB will provide room for solar power generation facilities in its Gwangju; Cheongju, North Chungcheong; and Icheon, Gyeonggi breweries. Kepco will be responsible for the engineering, procurement and construction of the facilities. Aeonus will then conduct operations and maintenance.

“The commencement of the construction of solar power generation facilities will start at Gwangju brewery in January 2021,” OB said in a statement. “We aim to generate solar power in all three breweries within the first half of this year. This marks the first time for a RE100 project to be specifically announced and implemented in Korea.”

Though the major reason OB is signing on to the RE100 initiative is because its parent company AB InBev is a member, the decision to use solar power was made by the Korean firm.

“AB Inbev has announced its goal to secure 100 percent of its purchased electricity from renewable sources and reduce carbon dioxide emissions by 25 percent by 2025,” according to OB.

“Wind power or bio energy are not easily implemented, so we decided on solar power because it could be implemented quickest [in Korea]. Not only is solar energy recommended by the government, but since there are also domestic companies with the technology to construct solar power facilities, we signed an agreement to use solar energy.”

But realizing the RE100 initiative isn’t going to be easy.

“On average, solar energy can only be developed for about three hours a day,” an official from OB said. “In addition, the amount of energy generated is not always stable and it takes a considerable amount of land. However, we plan to use all the electricity available from solar power.”

OB’s RE100 initiative is one of a number of environmental, social and governance (ESG) projects at the company.

“The signing of this agreement marks the realization of our efforts to start an RE100 business in Korea,” said OB CEO Ben Verhaert. “We will actively respond to climate change and strive to fulfill our environmental protection and social responsibility as a leading company in ESG management.”