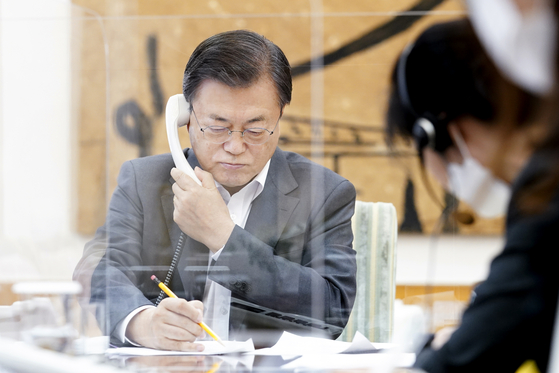 
South Korea proposed to the incoming Joe Biden administration a reopening of dialogue with North Korea in the spirit of the 2018 Singapore summit, according to a senior official in Seoul on Monday.

It was not revealed to whom in the Biden camp the message was relayed, or how, although the recipients are believed to be diplomatic figures associated with the president-elect.

The Singapore agreement was the result of an unlikely summit between the two leaders, which came about through Trump’s impromptu decision at the suggestion of South Korean envoys visiting the White House.

At the summit, the two leaders signed an agreement that pledged joint commitments to denuclearize North Korea, establish normal relations, work toward a peace settlement, and the recovery of the remains of U.S. soldiers on North Korean soil.

But save for the return of the remains, the vaguely worded agreement did little to advance Pyongyang’s denuclearization.

The second time the two leaders met at Hanoi, Vietnam, in February 2019, talks collapsed altogether. Relations have never since recovered, while tensions have crept up to pre-engagement levels on the Korean Peninsula.

Testifying to the North’s disenchantment with the last several years of high level diplomacy, Kim announced in an address to a rare party congress on Friday that Washington was the “foremost principal enemy” and that the North would continue its development of nuclear arms for its defense.

While acknowledging the cool state of relations, the South Korean official hinted that upcoming global developments may present a chance to restore talks if Pyongyang is willing.

“Chairman Kim Jong-un used rather strong expressions in North Korea’s recent party congress because the event was aimed at the North’s people, but his message itself was a request for dialogue with the United States,” the official said.

“It may be too early to tell, but it is viable to turn the situation around on the Korean Peninsula through the Tokyo Olympics scheduled for July,” the official added.

“The most important thing is that North Korea doesn’t carry out provocations until then.”

Seoul was open to inter-Korean discussions at any time, anywhere, even through a video conference, Moon said.

Many analysts, however, harbor doubts about whether referring back to Trump’s Singapore model with the Biden administration is an effective strategy.

“It is unrealistic to bring up a model criticized as being flawed in the United States, and to call for the Biden administration to continue a policy pursued by a political rival in President Trump,” said Wie Sung-rak, Seoul’s former top nuclear envoy.

Wie also expressed doubts about how successfully Seoul’s message would be carried on to the new administration, given the peripheral status of some of the U.S. figures mentioned as key contacts.

Figures in South Korea’s ruling Democratic Party continue to raise the idea of hosting Kim Jong-un in Seoul within the year, an ambitious proposal raised many times before.

Rep. Youn Kun-young, who dealt with the Blue House’s North Korea policy as a presidential aide during Moon’s past summits with Kim, said Sunday it was “imperative” Kim visit South Korea this year, suggesting that Kim’s intention was that the two Koreas pursue deeper exchanges free from U.S. interference.

Rep. Sul Hoon noted in a recent televised interview that he believed there was a “high likelihood” Kim would visit the South this year, sometime in the summer, though he presented no evidence to substantiate that claim.