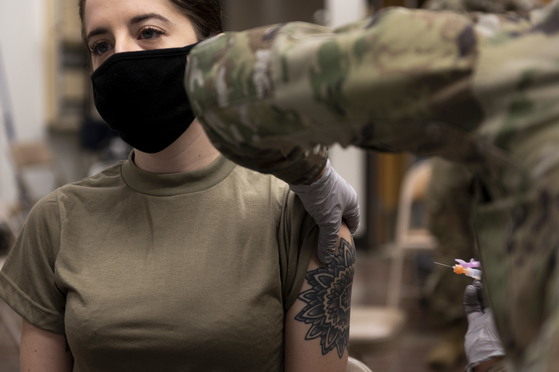 A medical staff member at the U.S. Army base in Osan, Gyeonggi, gets vaccinated against Covid-19 on Dec. 29. [NEWS1]


One of the first Koreans to be vaccinated against Covid-19, a Korean employee of a U.S. Army base in North Gyeongsang, spoke to the JoongAng Ilbo about having chills and muscle pains after a shot of Moderna's vaccine — side effects familiar from flu shots.

“I had muscle pains in my left arm, where I got the shot, for about two days,” a man in his 50s who works on the U.S. Army base in Chilgok County, North Gyeongsang, told the JoongAng Ilbo on Tuesday.

“Some of my coworkers reported having mild fevers," he continued, "but most of our side effects did not last more than two days.”

The first shipment of Moderna’s Covid-19 vaccines for the U.S. Forces Korea arrived in the country in late December. The South Korean government said that Korean soldiers and civilians working on the U.S. Army bases can take the shots if they wish to.

At least seven other Korean employees on the base in Chilgok received inoculations on the same day, Jan. 4, the man said.

They received around 0.5 cubic centimeters of the vaccine in their first shots, injected into the upper arm. The Moderna vaccine course consists of two shots. The next dose will be given 28 days after the first.

“My coworkers who received the vaccine shots were in their 30s, 40s and even 60s,” he said. “As far as I know, none of them have experienced any serious side effects.”

The man said that he and other Korean civilian workers on the base had initial reservations about getting the vaccines but that around 80 percent of Koreans on the base appeared to have received their first shots by Tuesday.

“Only those who voluntarily expressed their wish to be vaccinated were given the shots,” the man said.

Local experts said the side effects from the Modern vaccines seemed reasonable.

“The muscle pains near where the shot was given and the mild fevers are part of the normal responses from our immune system to vaccination,” Kim Shin-woo, a professor of infectious diseases at Kyungpook National University's School of Medicine, told the JoongAng Ilbo. “It would be problematic if there were no responses at all to the shots.”

Min Bok-ki, head of the Covid-19 response team at the Daegu Medical Association, said the government ought to be rolling out a detailed vaccination plan to prevent fear of vaccinations among the public.

“The Korean government should be studying how the vaccination programs are being implemented in other parts of the world and come up with a detailed plan,” Min said. “At this point it is imperative to ensure that the people are not too anxious about the effects of vaccination.”

Korea’s President Moon Jae-in promised free Covid-19 vaccinations for the entire country in a New Year’s address on Monday, saying that the first doses will be distributed from next month.

Korea went through a temporary scare over vaccine programs when reports of deaths following flu shots made headlines last October. By the end of the month, at least 28 people had died after receiving flu shots, many of them in their 70s and 80s.

The government held press briefings to explain that they did not find a correlation between the deaths and the vaccination program, adding that in 2019, around 1,500 people over the age of 65 in Korea had died after receiving flu shots of causes unrelated to the shots.

Sufferers from long Covid aren't ready for 'normal' yet