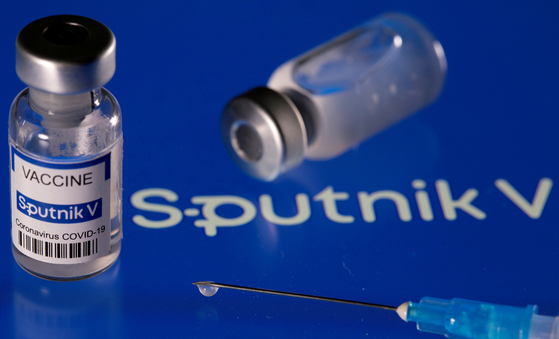 
President Moon Jae-in ordered a review for possible use of Russian Covid-19 vaccine Sputnik V as competition over the limited number of Covid-19 jabs heats up around the globe.

President Moon ordered a review of the Russian vaccine in response to his staff's suggestion of considering its introduction, according to a key Blue House official on Thursday.

"It is true that we are currently reviewing how Sputnik V is being used in other countries and whether there are any side effects," the official said.

Sputnik V was the world's first registered Covid-19 vaccine, which came out August last year and is used in more than 60 countries around the world, mostly in South America, Africa, and the Middle East. Sputnik V hasn't requested approval for its use in Korea yet.

"We are in the process of collecting data and monitoring the situation abroad," said Yang Dong-kyo, head of the country's Covid-19 vaccination team, at a regular briefing on Thursday.

Related ministries are also pitching in, as the Ministry of Food and Drug Safety confirmed on Thursday that it has requested the Ministry of Foreign Affairs to collect cases of side effects of Sputnik V in foreign countries. The Foreign Ministry said it complied by taking necessary measures.

The announcements came as growing calls came from within the ruling Democratic Party to procure additional Covid-19 vaccines amid worries of a vaccine shortage.

Gyeonggi Gov. Lee Jae-myung said he requested the Blue House on Wednesday to review introducing Sputnik V vaccines, saying, "The government needs to open the stage for various vaccine verifications in order to expand the scope of vaccine choices." Lee announced last week the province's plan to import additional vaccines other than the doses contracted by the national government.

The Democratic Party lawmaker Rep. Song Young-gil also mentioned the need to introduce the Russian vaccine as a "Plan B" in case the vaccine rollout does not go as planned.

In fact, Sputnik V has already equipped a production system in Korea.

With the Russian Direct Investment Fund (RDIF), Russia's sovereign wealth fund, two consortiums — one led by local bio-tech companies GL Rapha and Isu Abxis, and another by pharmaceutical company Huons Global — made a technology transfer deal on producing Sputnik V. The doses are set to be made in Korea from May, but will only be for export.

If the Ministry of Food and Drug Safety approves the use of Sputnik V, vaccine demand and supply would be expected to stabilize as local pharmaceutical companies can produce the vaccines made after the approval for Koreans first, based on the copyright from the technology transfer.

The problem with Sputnik V, however, is safety.

Medical experts have expressed concern regarding the fact that Sputnik V is a virus vector-based vaccine like that of AstraZeneca and Janssen, from which cases of rare blood clots have been reported.

Apart from the vaccine's efficacy, Sputnik V is turning into a political issue due in part to its producing country, Russia.

While most Western countries are reluctant to introduce Sputnik V, the vaccine is widely used in pro-Russia countries like Iran and Argentina.

As a result, Korea could potentially strain diplomatic relations for itself if it approves the Russian vaccine's use before the United States and European Medicines Agency (EMA), which is in charge of the European Union's vaccine licensing.

For this reason, Gov. Lee also said, "Sputnik V is considered a taboo because of the confrontation between the West and Russian camps."

While the probability of the United States introducing a Russian vaccine remaining low, if the EMA's approval also fails, the introduction of Sputnik V in Korea could be uncertain.

Foreign Minister Chung Eui-yong also mentioned the possibility of a so-called vaccine swap — a vaccine loan deal in which Korea would receive vaccines from the U.S. from its stockpile and then pay the U.S. back later with vaccines produced on consignment in Korea — with the United States to procure Covid-19 vaccines.

Such a deal, however, is not likely to happen, at least for now, as U.S. State Department spokesperson Ned Price declined to elaborate on the deal with Seoul and said the U.S. government is currently focused on vaccinating Americans during a press briefing Wednesday.

U.S. President Joe Biden also said that the United States does not have enough vaccines to send any abroad right now.

Currently, the vaccination rate in Korea remains at 3.67 percent, while the country's goal is to reach herd immunity, or inoculate 70 percent of the country's population of 52 million, by November.

As vaccinations are set to soon reach 2 million, another case of a serious side effect after an AstraZeneca jab was reported in the country on Thursday.

A 28-year-old man who received an AstraZeneca shot last month was reported to have suffered from a stroke, accompanied by partial paralysis in his arms and legs three weeks after his inoculation. While the man is known to have had no underlying disease, he is reportedly recovering after surgery following the stroke.

Health authorities said the case is far from being related from the controversial rare blood clot cases, and said they will confirm the exact diagnosis name and see if it is related to the vaccine. 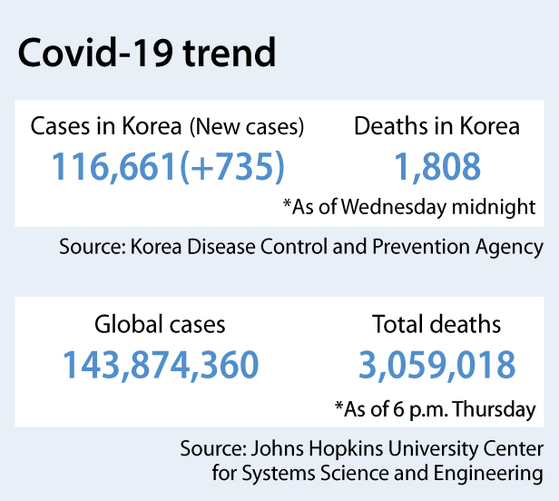