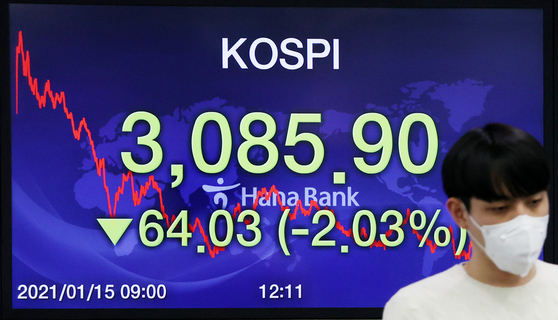 A screen at Hana Bank's dealing room in central Seoul shows the Kospi closing at 3,085.9 points, down 64.03 points, or 2.03 percent from the previous trading day on Friday. [YONHAP]


Stocks dipped more than 2 percent Friday as investors booked profits from a recent rally. The won fell against the dollar.

The Kospi opened higher, buoyed by a massive stimulus proposal by U.S. President-elect Joe Biden that fueled hopes of a speedy global recovery from the pandemic.

The stock prices faltered after hopes for the U.S. stimulus proposal were quickly priced into the market, analysts said.

"Foreigners seem to have turned to sellers after picking up the stocks that institutions sold in the previous session, the expiration day for stock options," said Kang Song-cheol, an analyst at Shinhan Investment.

The local currency closed at 1,099.4 won per dollar, up 1.4 won from the previous session's close.