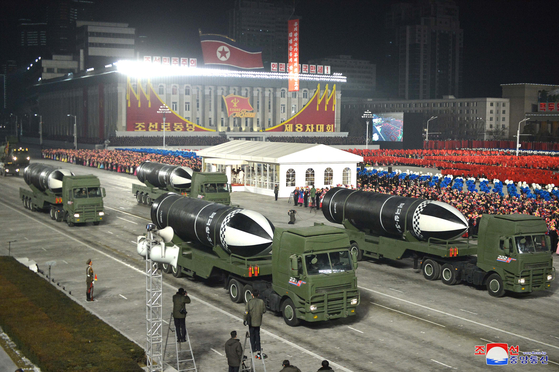 New submarine-launched ballistic missiles, called the Pukkuksong-5, are unveiled at a military parade in Pyongyang Thursday night to mark the close of the Eighth Workers' Party Congress, according to this state media photograph. [YONHAP]

Multiple units of the missile, labeled the Pukkuksong-5, were carried on launcher vehicles across Pyongyang’s Kim Il Sung Square and cheered on by thousands of people mobilized for the parade — including leader Kim Jong-un himself.

The weapon appeared to have a larger warhead than an earlier variant, the Pukkuksong-4, which the regime revealed in a parade on the 75th anniversary of the Workers’ Party in October.

Calling it the “world’s most powerful weapon,” the official Korean Central News Agency (KCNA) in an English-language report said the new SLBMs “powerfully demonstrate the might of the revolutionary armed forces.”

But while October’s parade featured a new, massive, intercontinental ballistic missile (ICBM) that showed off the regime’s long-range strike capabilities, that weapon was missing from Thursday’s event, based on state media footage.

Reprising past appearances were some of the newest weapons in the North’s conventional arsenal, including what it called “ultra-modern self-propelled artillery pieces” as well as “columns of rockets possessed of powerful striking capability.”

Such weapons were tested in a series of high-profile experiments by the regime over the past two years, and were widely trumpeted by Pyongyang as testaments to its expanding defense capabilities. 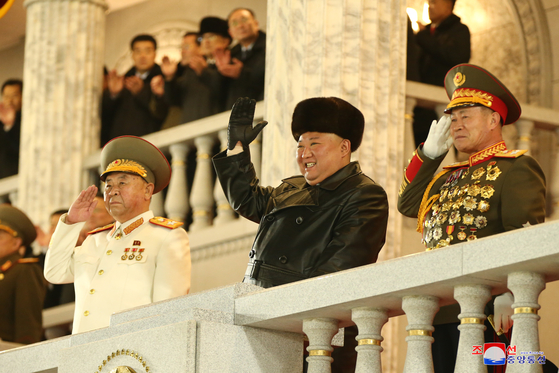 North Korean leader Kim Jong-un waves at troops marching at the military parade in Pyongyang on Thursday night, according to this state media photograph. [YONHAP]


State broadcaster Korean Central Television also revealed footage of the parade with a narration that used words like “nuclear state” and “nuclear power” to describe the regime’s military capacities.

Kim Jong-gwan, heading the newly renamed Ministry of Defense, delivered a speech at the parade that thumbed the regime’s nose at foreign powers.

“The armed forces of the Republic will strictly contain any military threats in the region of the Korean Peninsula and pre-emptively use the strongest offensive power to thoroughly smash the hostile forces if they jeopardize the security of our state even a bit,” Kim Jong-gwan said, according to KCNA.

This grand display of the regime’s military might came on the heels of its most important political event, the party congress, which officially closed on Tuesday with Kim proclaiming a redoubling of work on the country’s nuclear and conventional weapons programs.

The parade appeared to echo messages trumpeted at the gathering — that Pyongyang would not back down from U.S. efforts to throttle it into submission, and that it would further modernize its nuclear arms as a means to ensure its survival.

Kim praised his government for great results in developing its nuclear force since the successful test launch of the Hwasong-15 ICBM in November 2017, including progress in developing a host of submarine and ground-launched ballistic missiles, miniaturizing warheads as well as creating a "super-large hydrogen bomb."

Development of a nuclear-powered submarine — potentially capable of carrying nuclear warheads — was also in the “final stages of examination,” Kim said in a speech to the congress on Jan. 8. He also set new objectives for the regime’s defense industry, including enhancing the “pre-emptive and retaliatory strike” capabilities of nuclear forces by raising the accuracy of missiles flying across continent-wide distances.

These declarations signaled Pyongyang could be on the verge of returning to nuclear and long-range missile testing — a red line for the outgoing Trump administration.

But with nuclear talks with Washington all but defunct, and with a new president entering the White House, the North appears to have dug in for the incoming Biden administration continuing — or even hardening — the position that no economic concessions will be possible before Pyongyang denuclearizes. 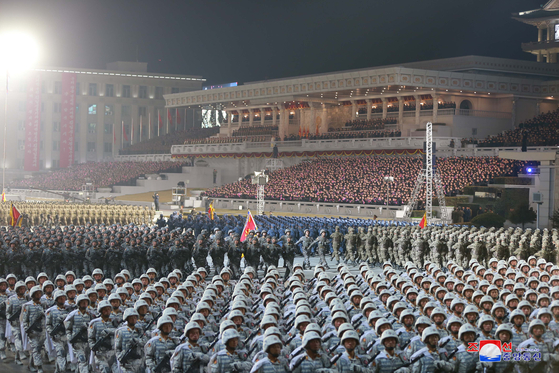 Thousands of North Korean soldiers march in unison at a military parade in Pyongyang on Thursday night, according to this state media photograph. [YONHAP]


The parade also followed a vitriolic statement issued by Kim’s younger sister, Kim Yo-jong, toward South Korea’s military after the latter announced Monday it detected a parade was carried out in Pyongyang Sunday evening.

It turned out the earlier event was probably a rehearsal for Thursday’s real parade. This did not stop Kim Yo-jong from ripping into Seoul for “craning its neck” into the North’s activities in a “clear expression” of hostility.

South Korea’s military gave no separate response to the younger Kim’s broadside, noting on Thursday it was analyzing Pyongyang’s military plans revealed at the congress. Seoul’s Ministry of Unification, its top inter-Korean agency, had a more sanguine view of the event, saying Kim Jong-un displayed a “reserved” stance toward the South in his speech on Jan. 8 by addressing the need for inter-Korean agreements to be implemented.