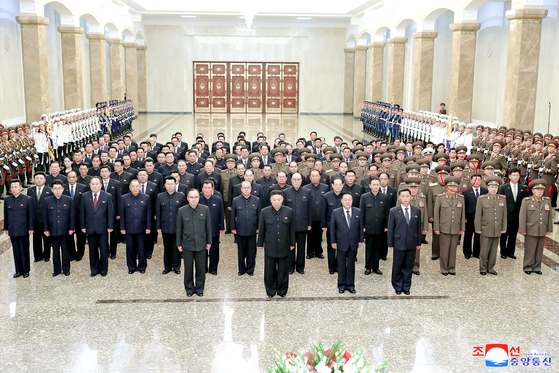 North Korean leader Kim Jong-un, center, pays tribute to his grandfather and regime founder Kim Il Sung alongside high-ranking Workers' Party members and military officials on the 27th anniversary of his death at the Kumsusan Palace of the Sun in Pyongyang on Thursday. [KCNA]


North Korean leader Kim Jong-un visited the Kumsusan Palace of the Sun in Pyongyang Thursday on the 27th anniversary of the death of North Korean founder Kim Il Sung, putting rest to rumors that he himself was dead.

The North's Korean Central News Agency (KCNA) said Kim Jong-un visited the Kumsusan Palace, where the bodies of his father Kim Jong-il and grandfather Kim Il Sung are enshrined, with members of the Politburo on July 8.

Since taking power in 2012, Kim Jong-un has visited the mausoleum, formerly the official residence of the North’s founder, every year on the anniversary of Kim Il Sung's death except in 2018.

The KCNA reported that Kim "made a bow of best wishes to the President and the Chairman who performed undying feats before the country, the people, the times and the revolution with their profound ideas and theories, extraordinary leadership ability and sweeping revolutionary practices.”

Kim Il Sung was declared permanent president of the country in the North’s constitution after his death. Kim Jong-il was similarly pronounced eternal chairman of the North's National Defense Commission after he died.

Accompanying Kim were Workers’ Party Politburo members and other senior officials. Photos released by KCNA showed Choe Ryong-hae, president of the presidium of the Supreme People's Assembly – the North’s rubber-stamp parliament – and other members standing next to Kim as they paid their respects to the regime’s founder.

Kim’s visit dispelled rumors that he had died, which the South Korean National Intelligence Service had directly dismissed recently. However, Kim Jong-un, who is known to have lost a lot of weight recently, looked gaunt compared to his usual appearance.

However, photographs of the visit did seem to confirm that there was some truth to rumors that Ri Pyong-chol, vice chairman of the Central Committee of the Workers' Party, had been purged from power.

Although Ri was present, he was in the third row rather than the first, confirming speculation that he was recently demoted in the North’s political hierarchy. He stood alongside alternate members of the Politburo, and not the permanent five members that include Kim.

Ri also wore a black Mao suit during the visit, as opposed to the military uniform he usually wears at political events.

Photos suggested Ri was not the only one to have been sidelined recently.

Pak Jong-chon, chief of the General Staff of the Korean People's Army, was seen standing in the second row wearing a vice marshal badge. Although this is the row where Pak usually stands at official gatherings, he was at the far end of the lineup, suggesting that he was demoted.

Other prominent attendees included the North Korean leader’s sister and supposed  confidante Kim Yo-jong, who was in the fifth row, while North Korea's first vice foreign minister, Choe Son-hui, stood in the back.

According to North Korean state media reports, Kim berated officials at an extended Politburo meeting last week for neglecting epidemic measures and dismissed key party members. However, the reports did not name specific officials, leading to rumors about who had been punished.