Craving something sweet? Try munching on these tomatoes

Craving something sweet? Try munching on these tomatoes 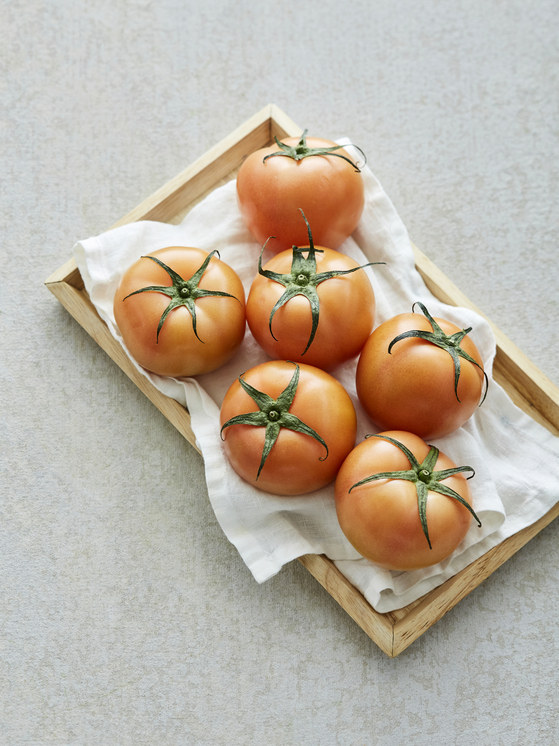 Tomango, stevia-enhanced tomatoes, are gaining popularity among those who enjoy the raw fruits rather than use them as an ingredient in their cooking. [MARKET KURLY]

Desserts don't have to be the only course to satiate your sweet tooth as new produce enhanced with sweet flavors continue to hit the market.

Some of these new produce includes tomatoes, the flavors of which have been enhanced with the artificial sweetener Stevia. These tomatoes come with a variety of names depending on their producers including Tomango, Shine Mato or Danmato, as dan in Korean means sweet.

While these processed products arrived in the market over a year ago, they are seeing popularity recently as consumers look to cure their curiosity. Many major online grocery stores have been stocking up on these extra sweet tomatoes.

These enhanced tomatoes look no different from the regular varieties, and the difference is only noticeable when you take a bite. The initial taste is almost syrup-like and you'll have to get used to the taste before you reach out for another.

Unlike the recently popular fruit shine muscat (a variety of grapes) which are genetically engineered, these tomatoes are just normal varieties that have been injected with steviocide to make them sweeter. The tomatoes are put in a pressure tank to add and reduce pressure to create space between the skin and the fruit inside, before the sweet additive is added.

Stevia is used as a substitute to sugar as it doesn’t have any impact on blood sugar unlike processed sugar.

“These special tomatoes enhanced with stevia during or after the fruit harvest are called stevia tomatoes, yet some mistakenly think this is a specific species as the farms or companies that produce such items don't specify how they're made,” said the Rural Development Administration in its brief on special tomatoes being distributed in the market. It quotes other reports saying, depending on how you make the stevia compound to inject and which tomato species you work with, the level of sweetness can differ. 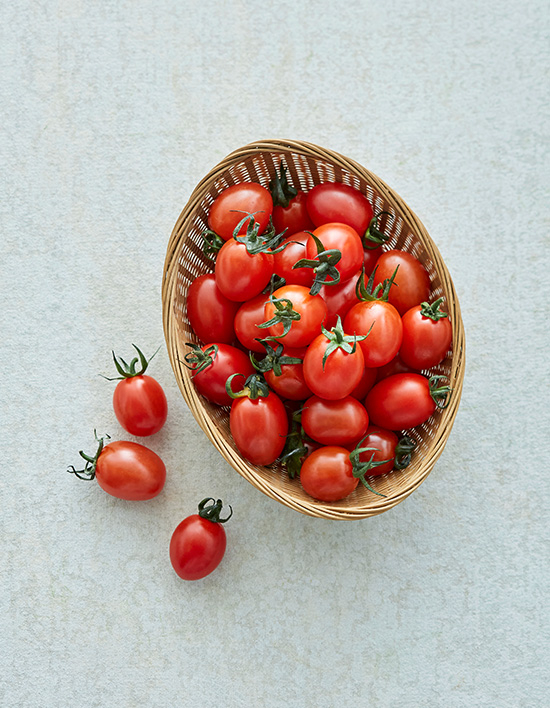 Stevia-enhanced cherry tomatoes are an easy-to-carry snack for those with a sweet tooth. [MARKET KURLY]

Market Kurly started to sell the stevia-enhanced Tomango and cherry tomatoes from Dec. 24. It’s been only about 20 days, but the sales of the latter 10 days increased by 28 percent compared to the first 10 days after their release. Shine Mato, which joined the shelves of the online platform last February initially didn't see much in the way of sales but that all changed in December when Shine Mato accounted for 10 percent of all sales of tomatoes.

“Just like some parents used to sprinkle sugar over tomatoes to get their children who didn't like them to give the produce a try, the customers seem to favor the sweetened fruit,” said Market Kurly’s communications team.

“Also, it seems that because stevia isn’t absorbed into one’s body, many take it as a fruit they can eat even when on a diet.”

Erin Lim of Seoul who uses Market Kurly to buy packs of tomatoes enjoys the fruit as it satisfies her sweet tooth and as an alternative to sugar-filled desserts.

Many celebrities have also shared that they enjoy the sweetened tomatoes on their social media accounts and during TV appearances, especially when they are dieting.

“The [tomatoes'] popularity follows the trend here that locals want desserts that are not sweet,” said columnist and chef Park Joon-woo. “Consumers seem to let their guards down when it comes to sweetness in fruits while they think any sugar in dessert is bad. In a way, it is just a matter of preference.”

Are they real tomatoes?

While processed food is usually very obviously packaged and clearly produced in a factory, a box of tomangos or the other stevia tomatoes look almost the same as the unsweetened varieties.

Jayden Won of Farm_Nevertheless shares his concerns about possible misunderstandings and also worries that people will only consider tomatoes as something sweet to eat raw rather than cooking them and bringing out their multiple layers of flavors.

“This technology to make produce sweeter seems to be easily applicable to other types of produce and it worries me that consumers will only continue to look for sweeter flavors,” said Won who joined his father’s farm from 1983 in 2015. The farm currently grows 22 different species of tomatoes looking for the best varieties to distribute in the market.

Tomatoes are the produce with the most gamchilmat, better known as the Japanese word umami. He wants to tell the local consumers that the tasty tomatoes they have had during their travels overseas can become available in Korea as well. He works on making the soil a good fit for each and every species he tries out to create a balance of flavors.

“Koreans seem to treat tomatoes more like fruits rather than an ingredient for cooking and don’t think much about using it as part of a sauce or as part of savory dishes.”

What to put on the table

What’s sweet isn’t bad, said researcher and chef Choi Jung-yoon of food company Sempio, but it’s worrisome when a flavor profile leans toward only one side.

“Setting a balance in ingredients is key over just getting ingredients that taste good,” said Choi, adding that every piece of produce has its own scent as well to create more harmony with its taste.

“Industry leaders present new products to make consumers open their wallets, and increased consumption creates a new trend that we can later call our culture.”

Farmers have been getting in on the action to target the many who look for produce that’s cultivated by their caring hands rather than the mass-produced, more affordable options widely available at big retailers.

Farmers' markets have been popping up across the nation where growers can communicate directly with consumers to not only learn where they are in terms of tasting capacity but also can educate them on what the produce should taste like. Farmers have also been working with agricultural organizations to create uniquely Korean species. Strawberries are one of the most popular fruits to work with in recent years and consumers now choose which box to take home based on the species.

Market Lazy Heaven based in Gochang, North Jeolla, is a distributor of local produce in Korea. It works with producers that have their own philosophies about growing vegetables and fruits

“We focus on discovering what’s naturally expected of each and every type of produce we distribute,” said Lian An of Market Lazy Heaven. As for blueberries, different species are mixed; hence, a box of blueberries naturally has fruits of different species ranging from those that are more sour to sweeter berries. The same logic goes with other produce it distributes including chestnuts.

“Just how different people think about the flavor profile of certain produce we send out, we try to provide as many recipes as possible so that consumers can find their own way to make the best of the produce that perfectly fits their taste buds.”

Koreans first considered sugar as a luxury back in the 1960s and 70s when sweeteners became widely available. Just like good tea, coffee or juice is offered to visiting guests, water with a spoonful of sugar was considered as the best treat to offer guests. 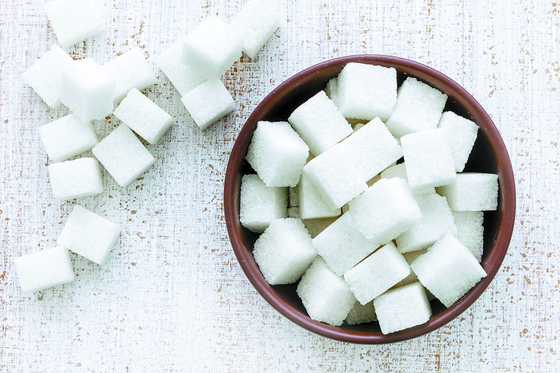 Sugar in a bowl. [JOONGANG PHOTO]


You might have heard people saying that food in Seoul s relatively sweeter than the same food found in other regions, but that claim has little ground, according to chef Hong Shin-ae of restaurant Salt in Gangnam District, southern Seoul.

“Seoul just happened to have more affluent people who had better access to sugar then,” said Hong. “It’s not that Seoulites have a different taste buds and make savory dishes sweeter. It was just a trendy item widely used in Seoul.”

Many restaurants that used honey or starch syrup to add a hint of sweetness to their food started to use sugar as a substitute.

“Different sweeteners react differently to heat, and such reactions have made many think that certain food served at restaurants, such as marinated beef, is too sweet,” she said.

Still, many restaurants use a large amount of sugar to cook their savory dishes in a way to find a balance, especially ones that are spicier.

“People commonly say that spicy and salty tastes relieve their stress as well as things that taste sweet and those seem to be the flavor combinations that appealed the most to the public,” said Park Joon-woo, a food columnist and chef.

“If you are not a master of food that needs to focus on the individual flavor of each ingredient, then as a restauranteur and small-business owner who has to sell as much as possible, adding sugar to spicy and salty food is the way to make dishes sell out.”

A variety of sweeteners

The favoritism over sugar has been diminishing with more people wary of using too much of the ingredient as health experts shed light on the ill effects excessive amounts of sugar can have.

What’s needed now is for consumers to be able to categorize different items that taste sweet, and consume them according to their needs, like people now do with fat, said restauranteur Hong. The public is well-informed and can tell butter and margarine apart and choose what to use depending on their health conditions and personal preferences after years of education thanks to the authorities and producers marking all the necessary information on the packaging.

The smarter way of choosing which fat to consume came after a backlash against fat, when people criticized fat for being an “unhealthy” ingredient for the body, she said. However, as the body needs a balance of ingredients, people have grown to understand more about what makes fat components and how to meticulously choose the one that fits their needs. Hong said a larger number of consumers need to know more about the different flavor profiles and production process so that people will stop perceiving sugar as something that is altogether bad.

“For sweeteners, consumers have some choices about whether they would want to use processed sugar from sugarcane, coconut sugar, honey or additives like stevia,” said Hong.

“Korea has just started to focus more on different sweetener options whether they are relatively natural or not, so I expect the future discussions on sugar may change a lot.”

Hong also doesn't expect the popularity of tomango to last too long.

“People are just looking for something new,” she said. “This type of processed food comes out momentarily as agricultural technology is advancing.”

“Although people may be intrigued to purchase it once or twice, I don’t think this particular produce has much potential to last in the market at the moment.”