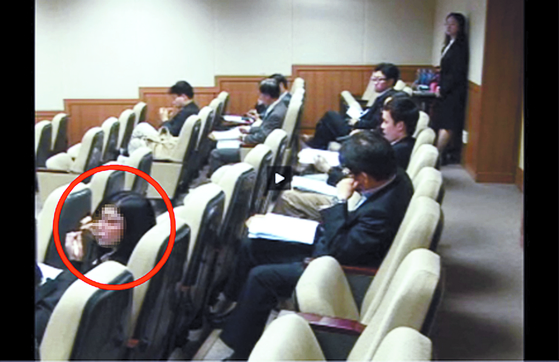 A screen capture of a video submitted by former Justice Minister Cho Kuk's wife Chung Kyung-sim to the prosecution in October 2019. Chung said that the woman encircled in the video is her daughter, attending a forum hosted by the Center for Public Interest and Human Rights Law at Seoul National University, one of the places where Chung said Cho interned at. The court ruled in December 2020 that the woman is not Cho Min. [YONHAP]


The head of a medical association is calling for the cancellation of the doctor’s license of Cho Min, daughter of former Justice Minister Cho Kuk.

“She has no credentials to be a licensed doctor,” wrote Lim Hyun-taek, president of Korean Pediatric Association, on social media Saturday. “Cho Min’s mother Chung Kyung-sim was convicted at court on Dec. 23, 2020, for obtaining through illicit means Cho’s admission to Korea University and the medical school of Pusan National University.”

Chung, an English-language professor at Dongyang University, was convicted of academic fraud to help her daughter get into Korea University and the medical school of Pusan National University. She was sentenced to four years by the Seoul Central District Court in December.

In the court’s ruling, Cho Min was mentioned at least seven times to have “conspired with Chung” to fabricate her credentials.

Chung has filed an appeal.

If both universities cancel Cho’s admissions, she becomes disqualified as a doctor, even though she has passed the state medical licensing exam.

The Medical Service Act stipulates that medical licenses can be obtained on the condition that the person passes the national medical licensing exam, with a bachelor’s, master’s or a doctor’s degree.

Lim deleted his posting by Sunday, but he had mentioned in the post previous cases concerning parents who abused their power to get their children into college, including the case of Chung Yoo-ra, daughter of Choi Soon-sil, confidante of former President Park Geun-hye at the center of the power abuse scandal that led to Park's impeachment in 2017. Park has been sentenced to 20 years for abuse of power and taking bribes. Choi has been sentenced 18 years for taking bribes.

Chung Yoo-ra's admission to Ewha Womans University was canceled by the Ministry of Education and the university in 2016, which was even before the prosecution started an investigation.

“Today, 130,000 doctors and medical students in Korea are appalled by the lukewarm response from the minister of education, presidents of Pusan National University, its medical school and Korea University to wait and see,” Lim wrote. “By allowing such an uncredentialed person as Cho to be a doctor, we are risking the lives of many patients.”

These credentials were listed in Cho's applications to Korea University and the medical school of Pusan National University.

The allegations against Cho and Chung arose in August 2019, when Cho Kuk was tapped as justice minister by the Moon Jae-in administration. Though Cho was sworn in the next month, he resigned in October, apologizing for the scandal.