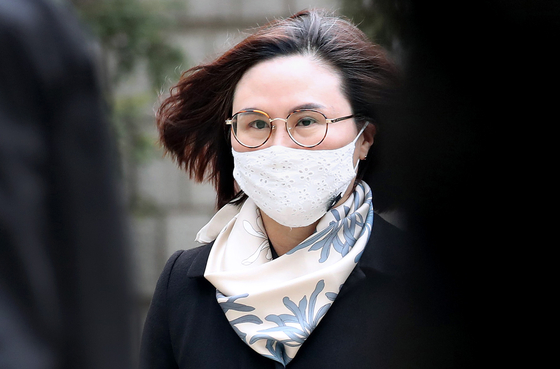 
A local court on Wednesday struck down a request by a doctor’s group to stop former Justice Minister Cho Kuk’s daughter from taking the state medical licensing exam, following her mother’s conviction for fabricating her daughter’s credentials to get into college and medical school.

Cho Min, a senior at the medical school of Pusan National University (PNU), remains eligible to take the two-day written test on Thursday and Friday after the Seoul Eastern District Court on Wednesday rejected the Korean Pediatric Society’s request to issue an injunction to stop her from taking it.

The society argued that Cho should not be allowed to take the exam until there is a final ruling in her mother’s appeals trial.

On Dec. 23, the Seoul Central District Court found Chung Kyung-sim guilty of fraud and sentenced her to four years in prison. She immediately appealed. The court ruled that Cho’s internships at prestigious institutions, including Dankook University’s Medical Science Research Institute and the Korea Institute of Science and Technology, were all fabricated, and that Chung had forged certificates attesting to them for her daughter.

During the injunction hearing on Monday at the Seoul Eastern District Court, the Korean Pediatric Society argued that patients and fellow doctors will suffer damages if a person whose medical license is expected to be revoked is allowed to perform medical activities.

The Seoul Eastern District Court ruled Wednesday that the society has no legal grounds to seek an injunction since it had not suffered any actual damage.