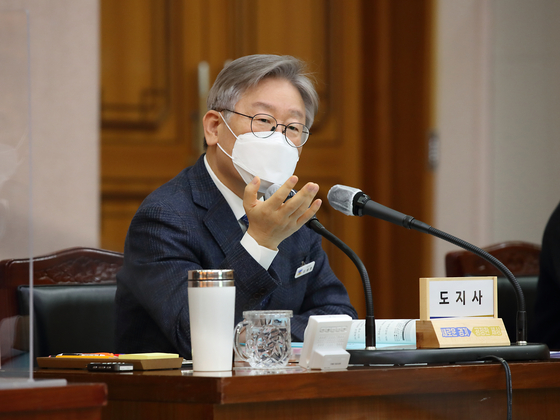 
Gyeonggi Gov. Lee Jae-myung is giving 100,000 won ($91) to all residents of the province to cope with Covid-19 economic fallout, despite the ruling party's disapproval.

The Gyeonggi Provincial Government said Tuesday it will respect the stance of the ruling Democratic Party (DP) and take into consideration the developing disease control situation to determine any second round of disaster relief for its residents.

“Local governments can make a decision autonomously," the DP said on Gyeonggi’s plan, "but should adjust the timing depending on the Covid-19 disease control situation.”

Hong Ihk-pyo, chief of the party’s policy committee, conveyed its stance to Lee, a member of the DP, Monday evening, providing grudging approval.

The DP’s position is that local government relief funds should be reviewed once a third wave of coronavirus infections have been curbed, with the greater Seoul area, including Gyeonggi and Incheon, still maintaining Level 2.5 social distancing measures and the rest of the nation under Level 2.

Korea has seen daily Covid-19 cases drop into the 300s over the past two days and health authorities cautiously noted a slowdown in the third wave of infections. But officials warn it’s too early for people to let down their guard ahead of the Lunar New Year holiday next month.

Lee was initially expected to hold a press conference on the relief fund Monday, which was canceled at the last minute because it fell on the same day as the president’s New Year’s press conference.

Criticizing Lee’s relief plans, Prime Minister Chung Sye-kyun said Jan. 7 “it was not wise, nor fair” to rush in handing out cash payouts.

In a Facebook post Tuesday, Lee called out local governments who bemoaned their lack of funds and wrote, "Ultimately, the decision on whether or not to pay disaster relief subsidies is a political decision on policy and budget priorities, rather than a problem of a lack of budget."

In April, Gyeonggi sent a first round of checks for 100,000 won to its residents, becoming the first local government to hand out such universal payments.

The province is reviewing whether the payments can come ahead of Lunar New Year, which falls on Feb. 12.

The province’s second round of disaster relief funds is expected to cover nearly 14 million residents of Gyeonggi, including foreign residents, and will require a budget of some 1.4 trillion won.

In a KBS interview last week, Lee Nak-yon, chairman of the DP, said the party can consider a plan to offer a fourth round of relief payments to all people once the pandemic subsides. He said that encouraging people to consume amid the rapid spread of infections may harm the government’s disease control and prevention measures and that “the appropriate time will be when infections dwindle.”

In the New Year’s press conference Monday, President Moon Jae-in said it was “too early” to discuss another round of emergency relief for the whole country.

Lee Jae-myung topped a Gallup Korea poll last Friday of most favored presidential candidates, with 23 percent of respondents selecting the Gyeonggi governor as their favorite, up three percentage points from a poll one month ago. He came ahead of Prosecutor General Yoon Seok-youl at 13 percent and previous frontrunner DP Chairman Lee Nak-yon, who came in third with 10 percent.