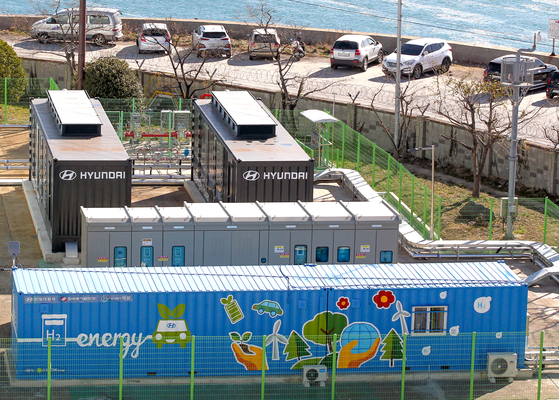 That is enough electricity to power 2,200 households using 300 kilowatt-hours of electricity per month.

The three companies signed a memorandum of understanding and broke ground in 2019 to run the pilot project with Hyundai Motor building the fuel cell system while EWP managing the facility and sales of electricity and Deokyang supplying the hydrogen.

The project will run through the next two years.

The three companies expect the latest project to help localize the components required to build fuel cell power plants, which used to rely heavily on imports.

“In the past, component replacement and maintenance cost for fuel cell facilities in Korea were high as they were mostly based on overseas technology,” the automaker said.

“The latest pilot project is expected to contribute in cost reduction of the system itself, as well as the price of hydrogen electric vehicles, by implementing a domestically developed hydrogen fuel cell system.”

Hyundai Motor has been active in developing the fuel cell system for power generation as it leads the fuel cell electric vehicle market with the Nexo SUV. Last year, it exported four of the systems to Switzerland. It aims to sell 700,000 by 2030.