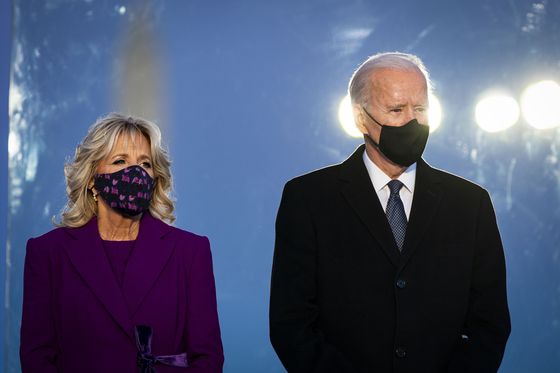 U.S. President-elect Joe Biden, right, and his wife Jill Biden, wear masks at the Lincoln Memorial Reflecting Pool during a Covid-19 memorial in Washington Tuesday on the eve of his inauguration Wednesday. [UPI/YONHAP]


As the Moon Jae-in administration enters its fifth year, it faces a new alliance partner in Joe Biden after his inauguration Wednesday.

Analysts stress that building chemistry with the new U.S. government will be especially important for South Korea, and point out some key discrepancies in the viewpoints of the Biden and Moon administrations on diplomatic and security issues, especially regarding North Korea.

Similarly, Moon said last April 27 that the Panmunjom Declaration of 2018 signed with North Korean leader Kim Jong-un during a summit at the inter-Korean border could not be properly implemented because of “international limitations.”

However, according to a group of 34 foreign affairs and security experts surveyed by the JoongAng Ilbo, only one responded that the Biden administration could consider partially easing sanctions on North Korea without progress in its denuclearization for the sake of improving inter-Korean relations.

The newspaper surveyed 34 Korean, American, Chinese and Japanese experts from Jan. 11 to 18 to gauge the Biden administration's views on key foreign affairs and security issues and prospects for cooperation with the Moon government.

The Biden administration could consider the lifting of certain sanctions with the dismantlement of North Korea’s Yongbyon nuclear complex, as proposed by leader Kim during a Hanoi summit with Trump in February 2019, according to 23.5 percent of the respondents, or eight experts.

The second North-U.S. summit in Hanoi ended with no deal as the two sides clashed over the scope of denuclearization need for sanctions relief, with Trump demanding measures beyond the dismantlement of the Yongbyon nuclear complex in North Pyongan Province, which could include revealing undisclosed nuclear facilities or a more concrete roadmap for denuclearization.

Likewise, 55.9 percent of the respondents, or 19 experts, said that the Biden administration could consider partial sanctions relief if North Korea agrees to dismantle Yongbyon and more facilities, or commits to a denuclearization roadmap.

While Biden has been critical of the Trump administration’s North Korea policy, the analysts surveyed generally indicated that sanctions are necessary in order to induce Pyongyang’s denuclearization.

“The Biden administration is expected to form a gradual nuclear negotiation plan based on the [Barack] Obama administration's nuclear deal with Iran, and sanctions are the most vital negotiation card here,” said Go Myong-hyun, a research fellow at the Asan Institute for Policy Studies. “Thus, it will not abandon such important diplomatic leverage for the sake of inter-Korean relations, separate from denuclearization.”

Bruce Klingner, a senior research fellow for Northeast Asia at the Heritage Foundation's Asian Studies Center, pointed to more technical aspects involving sanctions on North Korea and noted that some sanctions go beyond the North’s nuclear and missile programs.

“There are extensive UN and U.S. sanctions, only some of which are related to North Korea’s nuclear and missile programs,” said Klingner. He added the North Korean Sanctions and Policy Enhancement Act of 2016 precludes a U.S. president from suspending or terminating U.S. sanctions unless Pyongyang has taken certain steps, including improving human rights.

Li Chunfu, the vice director of the Asia Pacific Research Center at Nankai University, said that there is “a high likelihood that the Biden administration will recognize that a phased approach is the right way” to tackle North Korea denuclearization. He added, “South Korea should pursue progress in denuclearization corresponding with sanctions relief and start a four-party dialogue mechanism,” with North Korea, the United States and China.

Some experts expressed concern that such a discrepancy in views on sanctions relief could lead to tensions in the Seoul-Washington alliance.

Evans Revere, a former principal deputy assistant secretary of state for East Asian and Pacific affairs, warned that the sanctions relief issue “is at the core of the ongoing differences between the United States and the Moon government.”

He continued, “Sanctions and other measures that have been put in place are a core component of U.S. and international efforts to convince North Korea to give up its nuclear and long-range missile programs and end its ongoing violations of UN Security Council resolutions. They cannot and should not be lifted or eased except in response to serious steps that North Korea takes to reduce and ultimately end its nuclear and threat. The Biden administration will likely adhere to this long-standing view.”

Sino-U.S. tensions were considered the issue that will most likely cause major problems between the Moon and Biden administrations, with 26.9 percent of the 34 experts selecting a “new Cold War between the United States and China.” This was closely followed by 23.9 percent picking the Moon government “prioritizing improvements in inter-Korean relations” as a source of strife.

Moon praised the Singapore statement signed by Kim and Trump in their first summit in June 2018 in his Monday press conference and encouraged the Biden administration to inherit its principles, but some experts were skeptical.

The 34 experts were asked to rate the likelihood of Biden adopting the Trump administration’s Singapore agreement on a scale of zero to 10, with zero meaning not at all and 10 indicating a complete adoption, and the average score was 4.6. There were 13 experts who selected the medium score of five, 13 who selected between one to four points and eight who selected six to eight points.

But Biden was seen as likely to keep the so-called Quad security cooperation between the United States, Japan, Australia and India, with an average score of 8.1.

Experts were split on the issue of joint military exercises between South Korea and the United States, which have been suspended or scaled down in recent years during the period of dialogue with North Korea.

Some 44.1 percent of respondents said the Biden administration will be willing to “deal flexibly” with the exercises in order to maintain momentum in diplomatic negotiations, while 20.6 percent said they expected to return to previous levels of joint military exercises and 35.3 percent picked other reasons. Such other reasons included possible provocations by North Korea or the Covid-19 pandemic.

“The Biden administration, like in the case with Iran, will request a resolution through negotiation with North Korea, and is likely to approach the combined exercises with flexibility to the extent that it doesn’t harm the backbone of the alliance,” said Sheen Seong-ho, a professor of international security at Seoul National University.

Lee Shin-wha, a professor of political science and international relations at Korea University, said that the Seoul-Washington military exercises scheduled for March could be “an important litmus test for the Korea-U.S. alliance in the Biden era,” noting that “if South Korea only considers North Korea and shows an indecisive attitude, or attempts to reduce [the joint drills], it could weaken the alliance and also make it difficult to gain improvements in inter-Korean relations.”