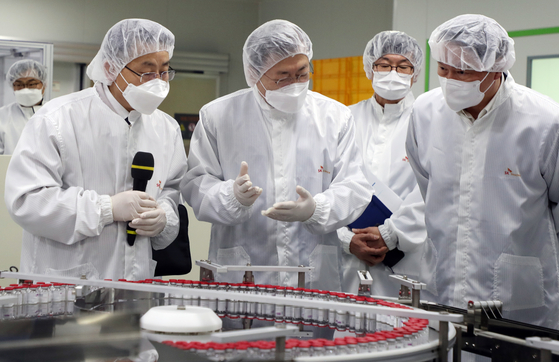 President Moon Jae-in, center, talks with SK Group Chairman Chey Tae-won, far right, Wednesday while touring a SK Bioscience factory in Andong, North Gyeongsang. SK Bioscience is in talks with Novavax to sign a technology transfer agreement involving the American drug company’s Covid-19 vaccine. If signed, the vaccine will be produced locally. The Andong factory is also where Covid-19 vaccines of AstraZeneca are being produced after SK Bioscience inked a contract manufacturing organization deal with the Britain-based drug company. [YONHAP]

They might arrive early next month, and if so, vaccinations will begin in early or mid-February, Chung said on an MBC radio show.

Chung’s remarks came exactly a year after Korea detected its first case of the coronavirus in a tourist from Wuhan, China, the early epicenter of the pandemic.

There were 404 new infections detected across the nation Tuesday, up from 386 the day before, said the Korea Disease Control and Prevention Agency (KDCA). Most were from Seoul and the surrounding province of Gyeonggi.

During the radio show, Chung mentioned that vaccines from the Covax facility, a global Covid-19 vaccine allocation plan, are expected to be the first vaccines to arrive in Korea.

The Korean government signed a deal with the Covax facility to receive enough doses for 10 million people, and next month’s batch will be a part of that, the prime minister said.

“They contacted us and asked whether we’d receive [the first batch] in early February, so we replied and are now preparing” the logistics, said Chung. “About 100,000 doses for 50,000 people will arrive first, but it hasn’t been completely settled yet and we’re still negotiating.”

On a separate note, the KDCA announced Wednesday that the Korean government was in discussions with Novavax, a U.S.-based pharmaceutical company, and SK Bioscience, a bioengineering firm under the Korean conglomerate SK Group, to secure more Covid-19 vaccines, enough to inoculate 20 million people. 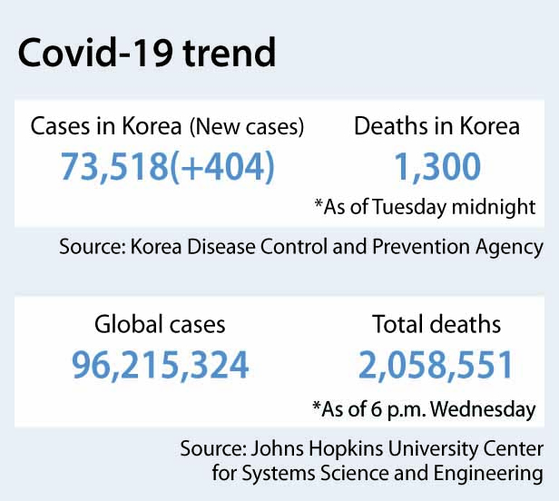 If the deal goes through, the Korean government will have sourced enough vaccines for 76 million people in total, far more than the national population of 51.8 million.

The KDCA said it plans to sign a pre-purchase deal with SK Bioscience after the Korean company signs a technology transfer agreement with Novavax, which would allow SK Bioscience to locally produce the vaccines in its factory in Andong, North Gyeongsang.

If everything goes as planned, it will mark the first time Korea receives vaccines locally through a technology transfer agreement with a foreign pharmaceutical company.

President Moon Jae-in wrote on Facebook Wednesday that he held a teleconference with Novavax President and CEO Stanley Erck earlier that day to discuss the procurement process.

Moon also visited SK Bioscience’s Andong factory Wednesday for a brief tour with SK executives, during which he said he looks forward to the technology transfer agreement and hopes it helps Korean companies develop their own Covid-19 vaccines.

Several Korean companies including SK Bioscience and Genexine are developing vaccines and aim to roll them out late this year or in 2022.

Novavax’s vaccine, called NVX-CoV2373, entered a Phase 3 clinical trial in Britain last September and another one in the United States in late December. The clinical trials will show whether the vaccine is safe and effective.

The vaccine is made from a purified form of the coronavirus spike protein and also contains an adjuvant, which enhances immune responses.

A KDCA official touted the Novavax vaccine as having a longer shelf life than other vaccines set to arrive in Korea.

“Other vaccines can normally be stored up to six months, but the Novavax vaccine can be stored longer than that, which means we could use the drug this year and also in 2022,” the official said.

Among 404 people who were diagnosed with the coronavirus Tuesday, 373 were due to domestic transmission, KDCA data showed.

The remaining 31 cases were imported — 11 from the United States, four each from Russia and Tanzania, three from Hungary, two from Germany and one each from Indonesia, the United Arab Emirates, Kazakhstan, Pakistan, Poland, Ghana and Nigeria.

Seventeen patients died, raising total deaths to 1,300, while 712 patients recovered, bringing total recoveries to 60,180. As of Tuesday at midnight, Korea had counted 73,518 Covid-19 patients in all.

A cluster that originated in the BTJ School, a Protestant missionary training center in Sangju, North Gyeongsang, reached 787 coronavirus patients as of Tuesday at midnight.

Some 3,000 people who recently visited the BTJ School have been ordered by the government to show up for testing, but health officials say many are refusing to be examined or are ignoring calls from their local government office.

The Seoul Metropolitan Government said Wednesday that 81 people who visited the BTJ School and live in Seoul have yet to be tested as of Tuesday midnight, despite the city’s order to be tested by last Friday. Seoul officials said they were planning to report all of them to the police within this week.