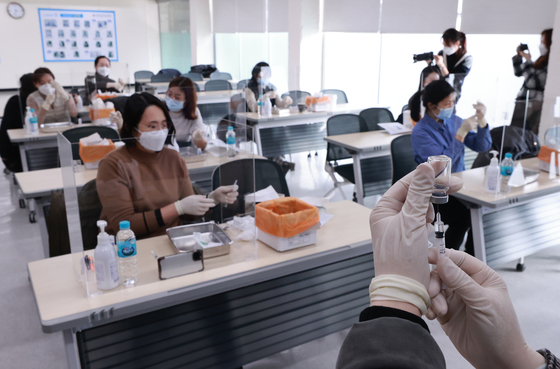 Nurses train for Covid-19 shots at the Korean Nurses Association in central Seoul Tuesday. These nurses will be dispatched to hospitals and treatment centers for Covid-19 patients. The first inoculations in Korea kick off on Feb. 26. [YONHAP]

Novavax will provide vaccines for 20 million people, or 40 million doses, through partner SK Bioscience, expected to be delivered in the second quarter, according to the Korea Disease Control and Prevention Agency (KDCA) Tuesday.

The government signed a deal with Pfizer Monday to deliver vaccines for an additional 3 million people.

The latest deal raises the total Pfizer-BioNTech vaccines to be delivered to Korea to 13 million. In December, the government purchased vaccines to inoculate 10 million people from Pfizer slated to be delivered in the third quarter. Pfizer agreed to advance the delivery of an initial batch, and the KDCA said Tuesday that doses for some 500,000 people are now expected in late March.

The Pfizer vaccine has an efficacy of 95 percent and is an mRNA vaccine that requires a tricky cold chain storage system. Novavax makes a viral vector vaccine with an efficacy of around 89 percent that can be stored in regular refrigerators and will be manufactured locally through a deal with SK Bioscience.

The government previously sourced enough Covid-19 vaccines to inoculate 56 million people through individual contracts with global pharmaceutical companies and through the Covax Facility, the World Health Organization’s (WHO) vaccine-sharing mechanism.

With the additional contracts with Novavax and Pfizer, the government has sourced vaccines to inoculate a total of 79 million people so far, more than enough to cover its 52 million population.

The KDCA announced Monday that some 272,000 people under the age of 65 in nursing homes and other high-risk facilities will be the first to be vaccinated in Korea starting Feb. 26 with AstraZeneca vaccines set to be delivered from Feb. 24.

The inoculation of people 65 or older with the AstraZeneca vaccine will be postponed until additional clinical data is available next month about its effectiveness in the elderly.

This could be a slight setback in the government’s ambition to achieve herd immunity by November.

The KDCA said that it plans to inoculate 760,000 people in high-risk facilities and Covid-19 medical workers in February and March. The general public is expected to get shots in the second half of the year.

Globally, there are concerns over availability of vaccines and whether drug companies can keep their delivery pledges, along with growing worries that some vaccines may be less effective with emerging variants that are more transmissible and possibly more deadly.

Korea's orders of Oxford-AstraZeneca vaccines for 10 million people begin with an initial batch scheduled to be delivered starting next week.

Johnson & Johnson's Janssen is set to deliver vaccines for some 600,000 people in the second quarter.

Moderna will deliver vaccines to inoculate 20 million people also from the second quarter.

Separately, Korea is set to receive vaccines for 10 million people through a deal reached with Covax Facility last October, which includes a small first batch of Pfizer vaccines for 55,000 people expected to arrive in the coming weeks.

All the vaccines except Janssen’s are two-dose regimens.

Korea is awaiting results of AstraZeneca’s ongoing phase three clinical trials in the United States, expected to be submitted around the end of March, to provide data on the efficacy of the vaccine on people 65 and older.

The WHO on Monday granted emergency authorization to the AstraZeneca vaccine made by Korea’s SK Bioscience and the Serum Institute of India.

AstraZeneca is the second Covid-19 vaccine to receive WHO’s authorization after the Pfizer drug was approved in December.