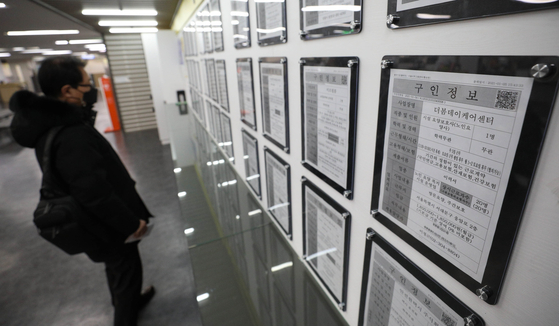 A man looks at a job bulletin board at an employment and welfare center in Mapo District, western Seoul, on Jan. 13. [NEWS1]

This is one of the findings detailed in a recent report published by Statistics Korea on changes in number of jobs in the public and private sectors in 2019.

Jobs in the public sector include employees who work for the central government and local governments, as well as those who work in public institutions.

The number of people who work for the central and local governments was about 2.22 million in 2019, up 5.9 percent compared to the year-earlier period. Those at public institutions amounted to 382,000, a 7.8 percent increase year-on-year.

By type of job, jobs in public administration, defense and social security were 48 percent of the total. Education-related positions, including public teachers and administrators, were 27.7 percent, while medical and social welfare services accounted for 3.5 percent. Science and technology service positions were 3.4 percent, followed by finance and insurance institution jobs at 3.2 percent.

Despite the fast growth in the number of jobs in the public sector, jobs in the private sector are growing slowly. 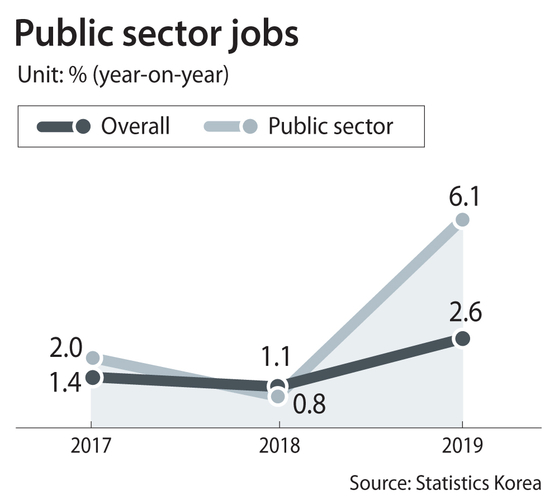 Among them, some 60,000 jobs were newly created in large companies, while small- and medium-sized companies hired 230,000 new employees. In non-profit organizations, 320,000 new jobs were created in 2019.

By industry, about 4.73 million employees worked in manufacturing — about 19.7 percent of all jobs. Some 3.06 million jobs came from retail and wholesale, while 2.11 million jobs were medical and social welfare related.