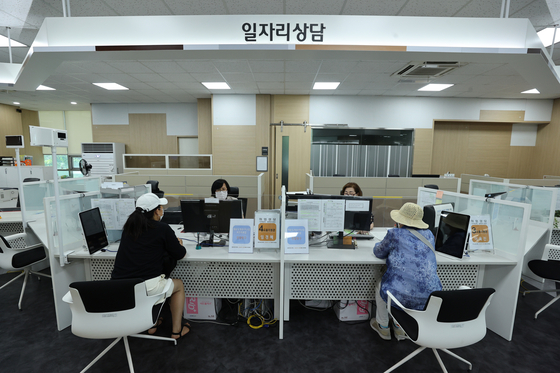 Job seekers visit a job center in Seoul on Wednesday. Jobs rose in Korea in June compared to a year earlier, but a fourth wave of Covid infections could threaten the economic recovery. [YONHAP]

Total employment grew in June, more evidence of a recovery from the earlier phase of the Covid-19 pandemic.

For the first time in more than five years, the number of people in their 40s with jobs increased compared to the previous year.

However, a fourth wave of Covid-19 infections could reverse June's gains.

According to Statistics Korea on Wednesday, the number of people working in Korea reached 27.6 million in June, 582,000 more than the same period a year ago, a 2.2 percent increase.

By category, jobs in health and social welfare, which are heavily funded by the government, continued to be a major driver. Last month 208,000 more were employed in this category, up 8.7 percent. Health and welfare is the third-largest sector of the economy in terms of jobs, employing 9.4 percent of all Koreans employed.

Government-funded programs for older workers have played a crucial role in keeping the sector's employment from falling.

That sector was particularly affected by Covid-19, and the steady rise in online shopping. 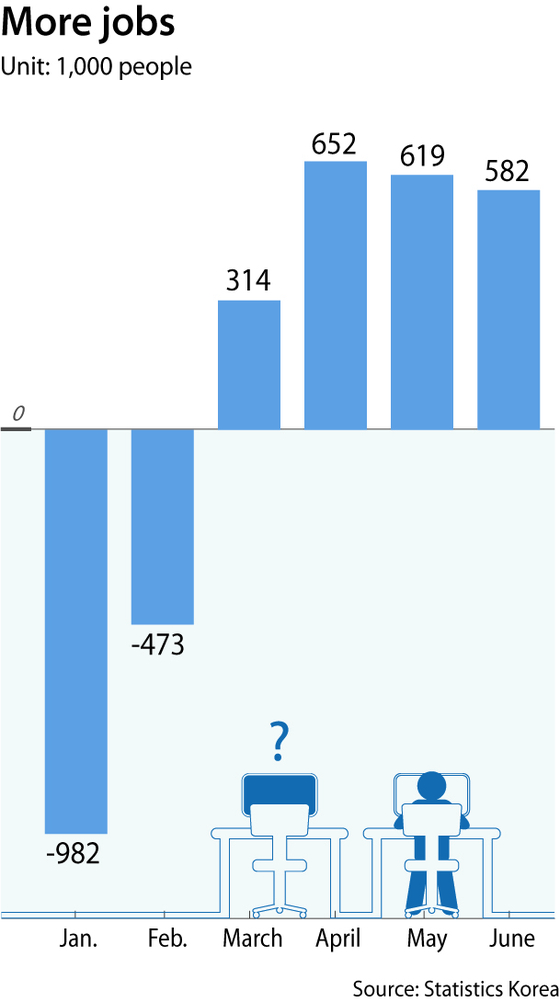 By age category, people 60 or older continued to get jobs at a greater rate than other groups. Last month 399,000 jobs were created in that category, a 0.9 percent increase.

Jobs for people in their 40s finally started to grow.

In that age group, June saw an increase of 12,000 jobs, a relatively slow 0.2 percent increase. But it was the first year-on-year increase since October 2015.

The only group that continued to see declines was people in their 30s. Last month, that group lost 112,000 jobs, a 2.1 percent decline.

Jobs for people in their 30s have been shrinking for 16 consecutive months, since March 2020.

The statistics agency blamed Korea's shrinking population for that decrease.

“One of the big reasons is the declining population [of people in their 30s],” said Chung Dong-myung, head of social statistics planning at Statistics Korea.

Chung also noted that people in their 30s are often employed in manufacturing and wholesale and retail, sectors that saw declines in jobs last month.

“We expect recovery to be difficult in the wholesale and retail sector, which continue to shrink, whereas jobs in manufacturing have been recovering, especially for young people,” he said.

The unemployment rate in June was 3.8 percent, a 0.5 percentage point drop from a year ago.
The number of people unemployed amounted to 1.09 million, 136,000 fewer or 11 percent less than a year ago.

“When considering that among the 846,000 jobs recovered this year, the public sector accounted for 42 percent, the rest or 60 percent is covered by the private sector,” Hong said.

But tighter social distancing measures could hurt jobs, he admitted.

“[The government] will do its best to control the spread of Covid-19 through strengthened social distancing measures and execute our job recovery policies without delay,” Hong said.

In raising its economic growth target from 3.2 percent to 4.2 percent recently, the government was banking on its own efforts to stimulate the domestic market.

A new round of emergency relief grants for all Koreans except the top 20 percent wealthiest and a cash-back program for intended to boost consumption.

But that was before the fourth wave of the pandemic, which is forcing the government to tighten its social distancing regulations.