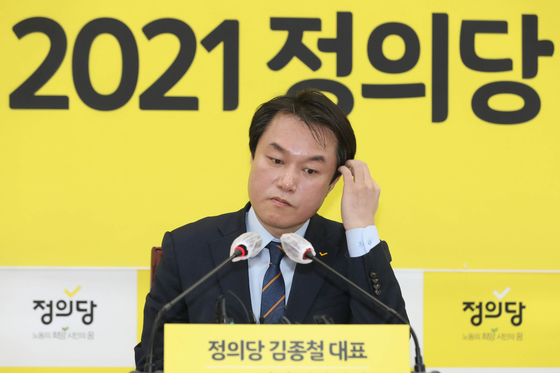 In this file photo, Justice Party Chairman Kim Jong-cheol prepares for the New Year's press conference at the National Assembly on Jan. 20, 2021. [YONHAP]


Justice Party Chairman Kim Jong-cheol stepped down after admitting to sexually assaulting one of the party’s lawmakers.

“I am here to announce very humiliating, devastating news that Chairman Kim committed sexual assault on Jan. 15,” Bae Bok-joo, deputy chair of the party, said in a press conference Monday. “The victim is Rep. Jang Hye-young, a member of the party.” 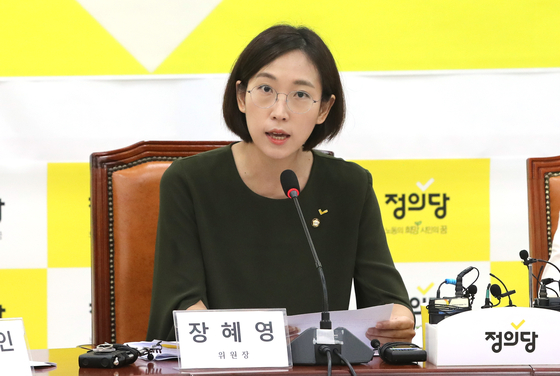 In this file photo, Rep. Jang Hye-young of the Justice Party announces the party's reform plan at the National Assembly on Aug. 13, 2020. [YONHAP]


The alleged assault took place on Jan. 15 after a dinner, and Jang filed a complaint with the party on Jan. 18. Bae, who is also in charge of the party’s gender and human rights division, said the party had conducted a one-week investigation.

“The outcome was reported to the leadership earlier this morning, a serious discussion followed and a swift decision was made since it involves the party’s chairman.”

The progressive party has six lawmakers in the legislature.

Kim issued a statement later Monday apologizing to the victim, party members and the public for the incident, which took place after a dinner between Jang and him on Jan. 15. “After the dinner, while we were waiting for our rides, I made inappropriate, nonconsensual physical contact with her, committing undeniable sexual assault,” Kim said. “I have no excuse for my action.”

Kim, a 50-year-old former student activist, entered politics in 1999. Since 2002, he ran in two local elections, four legislative elections and one legislative by-election, but never won any victories. He was elected Justice Party chairman last October.

Bae said the party’s leadership removed Kim from the chairman's post for the time being based on party regulations and started a disciplinary process.

“Our top priority is respecting the victim and helping her to return to a normal life,” Bae said. “We will show no tolerance to the offender and handle the case with the utmost seriousness.”

In his statement, Kim also said he asked the party for tough punishment. “My action was unacceptable, especially since I was chairman of a political party that swore to fight sexual harassment and sexual violence.”

“It was extremely painful that my dignity was violated by a political comrade and deeply trusted party chairman,” she said. “Despite fear and worry, I decided to hold him responsible publicly because I believed it was a way to restore my dignity, return to my normal life and better serve the party and society.”

She said she is worried about unfair political attacks after going public, but was more fearful of being cowed into silence. Jang, 33, is a movie director and championed causes for people with disabilities before entering politics.

Kim’s resignation came at a sensitive time. The country’s two largest cities will hold mayoral by-elections in April to fill vacancies that were both created because of sex scandals surrounding politicians of the ruling Democratic Party (DP).

Last April, Busan Mayor Oh Keo-don, the first DP politician ever to win the post, admitted to molesting a female employee of the city government and resigned. Prosecutors are still investigating Oh's case.

Three months later, Seoul Mayor Park Won-soon committed suicide after his former secretary filed a complaint that he made unsolicited sexual advances for more than four years. Park, also a DP member, had a reputation for championing society’s vulnerable. He was the longest-serving mayor of Korea’s capital and was expected to run for president in 2022.

In this file photo, people pay respects at the mourning site for the late Seoul Mayor Park Won-soon in front of the Seoul City Hall on July 12, 2020. [WOO SANG-JO]

When the Seoul Metropolitan Government held a five-day mourning period before the funeral of Park in July, Reps. Jang and Ryu Ho-jeong of the Justice Party refused to pay respects to express their support for his alleged victim. That decision invited political controversy.

At the time, Kim, who was spokesman for the party, defended Jang and Ryu. “In our society, victims of sexual violence cases are often women,” he said. “I believe they were expressing their view on this aspect.”

The opposition People Power Party (PPP) did not miss an opportunity to attack the liberals, particularly the DP, ahead of the crucial by-elections. PPP politicians running for the Seoul mayorship said Kim’s sexual assault was shocking, but acknowledged that the Justice Party at least handled the situation well compared to the DP.

“How the Justice Party managed the situation was appropriate,” Na Kyung-won, a former lawmaker of the PPP, said in a Facebook message. “Although Kim was the party’s chairman, he was immediately investigated and the party swiftly made an important decision [to dismiss him]. It was clearly different from how the DP brutalized Park’s victim by calling her a supposed victim.”

Oh Shin-hwan, another PPP contender, agreed. “It is clearly different from the DP, which tried to cover up the case, informed Park that he became a subject of an investigation, lied, shed crocodile tears and reversed an early vow to not nominate a candidate to fill his vacancy,” Oh said.

Seocho District head Cho Eun-hee, also a contender, said strong measures are needed to fundamentally root out sexual violence in the political arena, particularly among liberals. “Voters must send a verdict to the leftist politicians on their abuse of power to commit sex crimes in the upcoming by-elections in Seoul and Busan," she said.

It remains to be seen if Kim will face a criminal investigation. “Based on the victim’s desire, we will not file a criminal complaint,” said Jeong Ho-jin, spokesman for the Justice Party. “We will try to resolve this issue as a community.”

It is possible for a third party like a civic group to file a criminal complaint. If Jang refuses to give a victim’s statement, however, a probe may not lead to an indictment.