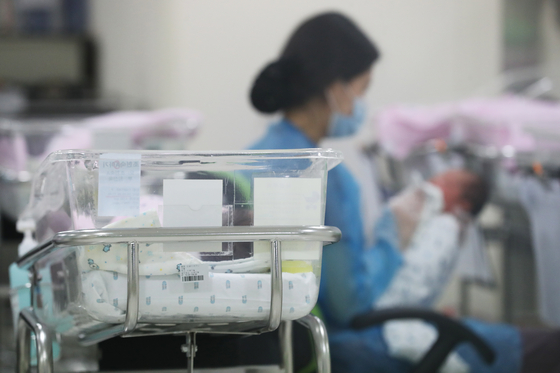 A newborn nursery at a hospital in Seoul in February 2019. [YONHAP]


The population continues to fall as births are barely above 20,000 a month, while the number of people dying continues to grow.

According to Statistics Korea on Wednesday, in November 20,085 newborns were reported, which is a 15.3 percent decline year-on-year, or 3,642 fewer.

It is the smallest number of newborns recorded since the data were first compiled in 1981 and a quarter of February 1982’s total, when newborns hit a record 94,346.

The number of newborns has been declining compared to the previous year for 60 consecutive months since December 2015.

Unless the number surges, the number of newborn for the full year will drop below 300,000 for the first time. This is a rapid drop considering that the babies born annually fell below 400,000 in 2017.

In November, the number of people that passed away totaled 25,669, up 1 percent year-on-year.

At this rate, it will be inevitable that 2020 Korea will record a net population decline.

“The natural population decline is happening rapidly as factors such as the falling number of women in their 30s is contributing to low birthrates, while deaths are increasing due to rapid increase in elderlies aged 65 or older,” said Kim Soo-young, head of the Statistics Korea's vital statistics division.

The situation is unlikely to turn around total marriages shrinking as well. In November 18,177 couples got married, a 11.3 percent decline year-on-year.

The statistics agency said the novel coronavirus was having an impact on marriages as people have been postponing their weddings amid the strict social distancing.

The economic impact of Covid-19 is one reason people are giving up on marriages.

Divorces in November when compared to the previous year were down 3.5 percent to 8,876.