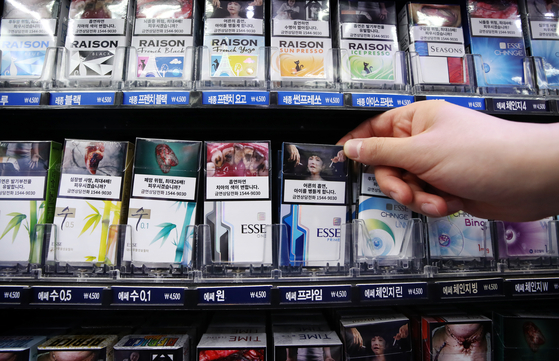 Cigarettes on sales at a convenience store in Seoul in December 2020. [YONHAP]

The government wants cigarette prices, which are currently between 4,500 won ($4.02) and 5,000 won a pack, to reach the level of OECD countries by 2030 to improve the general public’s health.

Booze prices will be raised too.

The last time cigarette prices were raised was in 2015.

The Ministry of Health and Welfare on Wednesday announced a comprehensive plan to improve health in the nation and extend the average life expectancy from 70.4 as of 2018 to 73.3 by 2030.

The price of cigarettes will be raised to the OECD average of $7.36 by 2030. This includes e-cigarettes.

The government estimated that this would lower the percentage of males who smoke from 36.7 percent as of 2018 to 25 percent by 2030.

But actual price increases have not been decided upon yet.

The government will raise its health promotion fee applied to cigarettes, which is currently 841 won per pack. It was raised from 354 won in 2015.

To cut back on alcohol consumption, the government plans to raise prices and tightening regulations on booze advertising.

Already, alcoholic beverage cannot be advertised on TV between 7 p.m. and 10 p.m.
The government plans to expand advertising restriction to other media such as the internet.

According to the National Health Insurance Service, the health costs of alcohol are nearly 9.5 trillion won a year, higher than similar costs for smoking, at 7.1 trillion won, and obesity, at 6.7 trillion won.

The government is getting some pushback as President Moon Jae-in was highly critical of the Park Geun-hye government’s 2015 decision to raise the price of a pack of cigarettes from 2,500 won to 4,500 won, claiming that it was a ploy to take in more revenue at the expense of smokers, including relatively poor smokers.

Cigarette sales have been falling and tax collected from smokers have been rising.

In the first three quarters of last year, cigarette sales were down 15.1 percent compared to the same period in 2014, before cigarette prices were raised. Collections of individual consumption tax and value-added taxes charged on cigarettes surged 67.1 percent in the same period.

But Prime Minister Chung Sye-kyun explained in a Facebook post Thursday afternoon that the government has no plan to raise the prices.

[WHY] A look through green-tinted glasses at Korea's soju obsession