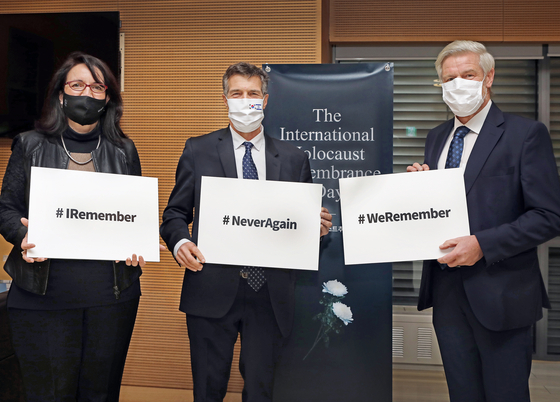 
One by one, candles prepared at the Goethe-Institut Korea in Seoul were lit before the eyes of members of the Israeli and German communities in Korea as they remembered the victims of the Holocaust on Wednesday evening.

“In 2005, the United Nations declared Jan. 27, the day of liberation of Auschwitz death camp [in 1945], as International Holocaust Remembrance Day,” said Marla Stukenberg, head of the Goethe-Institut Korea, during the commemoration held at the institute on Wednesday. “For several years, embassies of Israel and Germany and the institute have jointly commemorated this day of remembrance here in Korea.”

Due to the Covid-19 pandemic, the annual commemoration to remember the victims of the Holocaust was held both online and offline, with less than 50 attendees in person, in accordance with the social distancing guidelines in place in Korea.

Six candles were set on the stage, each lit by members of the communities of Israel, Germany and Korea. It was apparent the candle-lighters served a symbolic role themselves.

Taking turns, Song Young-gil, the chair of Foreign Affairs and Unification Committee of the National Assembly of Korea, and defense and military attachés of Israel and Germany lit the first three candles.

“While the number of people who survived the genocide of Jewish men and women in Europe are steadily decreasing [...] it is important to educate the young people about the unprecedented crimes committed under the Nazi German rule,” said Stukenberg. 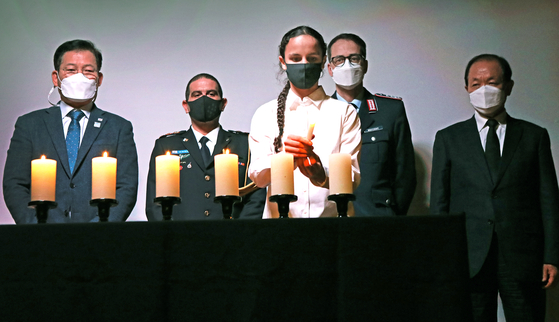 Shai Gambash, a representative of the Israeli youth in Korea, lights a candle to remember the victims of the Holocaust during the commemoration on Wednesday. Behind her, from left, are Song Young-gil, the chair of Foreign Affairs and Unification Committee of the National Assembly of Korea; Col. Yariv Ben Ezra, defense attaché of Israel in Korea; Col. Achim Neitzert, military attaché of Germany in Korea; and Hwang Woo-yeo, former deputy prime minister for social affairs and education minister. [PARK SANG-MOON]


Remembering the Holocaust is still relevant today due to the recent rise of anti-Semitism in several parts of the world, as emphasized by several speakers at the commemoration.

“The Holocaust was incomprehensible, and yet it happened in the heart of modernity, in the technological age of mass media, in a period not that different from our own in terms of material and societal circumstance,” said Israeli Ambassador to Korea Akiva Tor. “There is evil in the air enabled by uncritical cyber sphere which will broadcast any lie if it serves [an economic purpose] on the internet. Only very recently has Facebook determined that Holocaust denial is a form of severe hate speech and not mere historical debate.”

Facebook has banned any postings that deny or distort the Holocaust since October 2020.

“The spirits of evil are emerging in a new guise, presenting their anti-Semitic, racist, authoritarian thinking as an answer for the future,” said German Ambassador to Korea Michael Reiffenstuel. “I wish I could say that we Germans have learned from history once and for all. But I cannot say that when hatred is spreading. There remains only one answer: Never again. Remembering the six million Jewish victims of the Holocaust perpetrated by Nazi Germany is a responsibility not only of governments but of societies as a whole. And as a German citizen, I see it as my duty to contribute actively, that the Holocaust will be never forgotten.”

The commemoration was joined by Israeli pianist Aviram Reichert and German cellist Valentin Andert, who together played the “Hebrew Melody” by Joseph Achron and “The Sonata for Cello and Piano in D minor, Op. 40” by Dmitri Shostakovich.