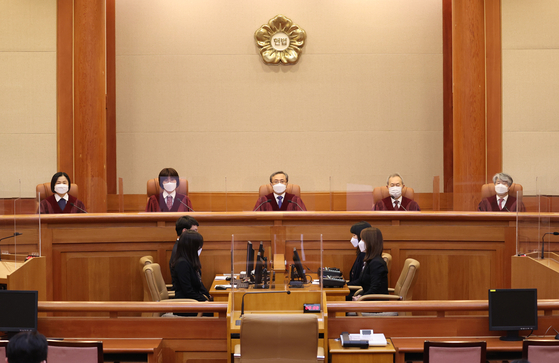 The Constitutional Court on Thursday rules to uphold the legality of the Corruption Investigation Office for High-ranking Officials. [YONHAP]


Korea’s Constitutional Court upheld the constitutionality of the newly established Corruption Investigation Office for High-ranking Officials (CIO) on Thursday, striking down challenges claiming the agency violated the principle of separation of powers.

Five of the court’s nine justices supported the legality of the CIO’s status as an executive agency autonomous from the country’s regular administrative hierarchy under the purview of the Prime Minister’s Office. Another justice called for the suit to be dismissed altogether.

The court’s majority also ruled down claims filed by opposition People Power Party (PPP) lawmakers in the same suit that argued the CIO violated the basic rights of those under its jurisdiction, including some 6,500 senior officials, former and incumbent.

“Should these high-ranking officials and their families commit crimes related to their positions, their subjection to investigation and indictment by a law enforcement agency cannot be labeled as unfair discrimination.”

Figures who can be prosecuted by the CIO include the president and his or her immediate relatives; senior presidential aides; the National Assembly speaker and lawmakers; the Supreme Court chief justice and judges; the Constitutional Court chief justice and judges; the prime minister, ministers and vice ministers; the prosecutor general and prosecutors; mayors, governors and education office chiefs; and senior police and military officers.

Thursday’s decision represents a major victory for the CIO, whose legitimacy as a parallel law enforcement body to the state prosecution service was controversial from the onset.

As the centerpiece of the ruling Democratic Party’s (DP) decades-long effort to rein in the powers of the prosecutors and undercut their influence in politics, the CIO has been accused by opposition figures as a means by the Moon Jae-in administration to silence critics.

After losing a contentious vote on the bill to establish the CIO at the National Assembly in December 2019, the PPP filed its suit to the Constitutional Court in February last year as a last resort, all while employing obstructionist tactics to drag out the process of launching the new agency.

Partisan conflict over the agency flared up again last December, when the DP controversially revised the CIO law to lower the threshold needed to select the agency’s head, bypassing vetos from opposition-appointed members.

While the Constitutional Court’s verdict may provide the CIO with legitimacy to begin its work, the ideological split on the bench toward the case suggests partisan conflict over the agency is far from over. Three justices voted the CIO as unconstitutional.

Judges Lee Jong-seok and Lee Young-jin, both appointed by conservative parties, released dissenting opinions that echoed the PPP’s argument, reasoning the agency would effectively stand above other law enforcement bodies in the country due to its prerogative over high-profile cases.

The two judges further warned that the CIO posed a threat to the independence of the courts, noting judges were liable to be investigated due to the litigiousness of the public toward judges.

With his efforts to staff the new agency greenlit with the ruling, CIO chief Kim vowed in a press conference to build an agency that strictly respects political neutrality and carries out fair investigations of the country’s elite.

Kim named fellow former judge Yeo Woon-guk, the current deputy head of the Korean Bar Association, as his lieutenant to head the CIO. Yeo was picked out of two figures, including a prosecutor, recommended for the deputy post, Kim said.

The selection defeated expectations that Kim would appoint someone from the prosecution service who would make up for his own lack of experience in leading investigations.

As for the 23 other prosecutors to be selected, as well as 40 other non-prosecutor investigators, Kim stressed appointees will undergo a vetting process by the bipartisan committee that will ensure the organization does not become politically compromised.

The former judge further stressed he would breed a horizontal and egalitarian culture at the agency open to debate and communication — a clear suggestion he would model the CIO in contrast to the state prosecution service, often criticized for its rigid internal hierarchy known to stifle dissent.