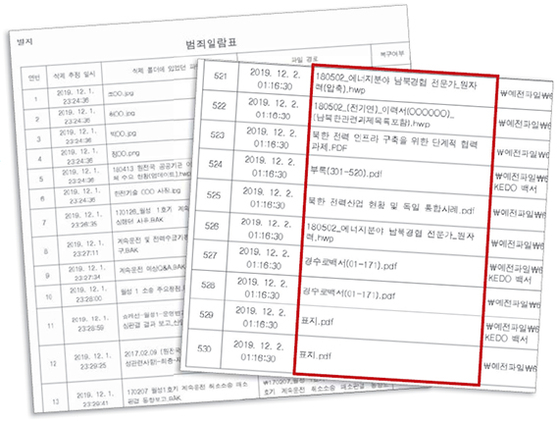 An attachment of the prosecution's paperwork indicting three Ministry of Trade, Industry and Energy workers on charges of deleting government files shows that the ministry once planned to build a nuclear plant in North Korea. [JoongAng Ilbo]


The Moon Jae-in administration had prepared an audacious plan to build a nuclear power plant in North Korea in 2018, an evidence list submitted by prosecutors to a court in Daejeon revealed.

The JoongAng Ilbo on Thursday obtained a list of 530 files that public servants at the Ministry of Trade, Industry and Energy allegedly deleted from ministry computers before the Board of Audit and Inspection’s (BAI) audit in December 2019. The list is an attachment to the prosecution’s indictment paper against three suspects accused of obstructing the audit.

Last year, the Daejeon District Prosecutors’ Office investigated an allegation that the ministry had obstructed the BAI's audit in 2019 into the government’s controversial decision to shut down the country’s second-oldest nuclear reactor earlier than scheduled. Following the probe, three workers including a director-level official were indicted on Dec. 23, 2020 on charges of deleting massive amounts of ministry data right before the audit.

The prosecution has restored 530 deleted files. Among them were 17 files concerning North Korea, created in 2018. Those documents were stored inside a folder, titled as “60 pohjois.” Pohjois is a Finnish world for North.

One file, dated on May 2, 2018, had the title “Experts in inter-Korean economic cooperation in the energy field.” Two files, each dated May 14 and 15, 2018, were both titled “Plan to build nuclear plant in North Korea.”

Other files included “North Korea’s electricity industry report and the case study of Germany” and “Step-by-step tasks for cooperation to build electricity infrastructure in North Korea.”

Another deleted file contained a list of people with experience with the Korean Peninsula Energy Development Organization (KEDO). It was a byproduct of the failed 1994 Geneva Agreement. South Korea, Japan and the United States established the KEDO to build two light-water nuclear reactors in the North to meet the country’s civilian energy needs in return for Pyongyang giving up nuclear arms programs.

The files were mainly created after Moon’s first summit with North Korean leader Kim Jong-un on April 27, 2018 at the Truce Village of Panmunjom.

During the summit, Moon handed Kim a blueprint for a new economy on the Korean Peninsula.

“I handed over a booklet and a presentation video to Kim,” Moon confirmed during a senior presidential secretariat meeting he hosted three days after the summit. Moon reportedly gave a digital file of the presentation in a USB drive to Kim. 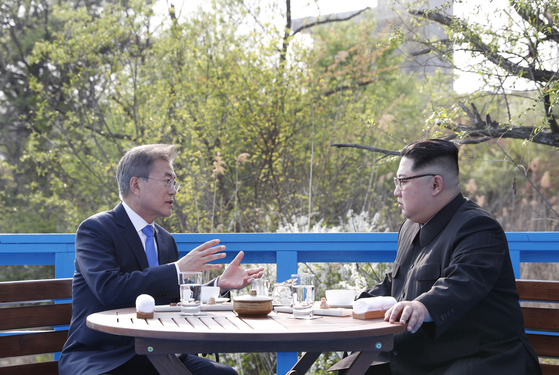 In this file photo, President Moon Jae-in, left, talks to North Korean leader Kim Jong-un in a one-on-one dialogue as part of the inter-Korean summit in Panmunjom on April 27, 2018.

When Moon and Kim had a one-on-one dialogue at a pedestrian bridge inside Panmunjom during their first summit, Moon was caught on a TV camera from a distance appearing to say “power plant issue” to Kim. That fueled speculation that the two leaders must have discussed energy issues in the North after denuclearization.

In November 2020, the Chosun Ilbo published an exclusive report saying that the Moon government had planned to build a nuclear plant in the North.

A key associate of Moon, however, flatly rejected the report, calling it “fiction.” Rep. Youn Kun-young of the Democratic Party, who served as chief of the state affairs planning and monitoring office of the Blue House in 2018, said “There never was any mention of a nuclear plant during the inter-Korean summit.”

Officials at the Ministry of Trade, Industry and Energy say they are baffled by the discovery that plans concerning the construction of a nuclear plant in the North were among the files deleted before the audit, which is likely to have diplomatic repercussions.

“To my best knowledge, there was no order to plan nuclear power plant construction in the North,” said a senior official of the ministry. “But I do not know if officials had prepared such plans at the time.”

He also said it is possible the government could have prepared various scenarios because the mood between the two Koreas was optimistic after the Moon-Kim summit in 2018.

Another government source told the JoongAng Ilbo on Friday that the atmosphere was completely different at that time.

“At the time, inter-Korean relations were restored and a North-U.S. summit was being planned,” he said. “You have to take that into account. The ministry could have prepared plans for what may come in the future.”

The source refused to say whether the ministry workers deleted the files concerning North Korea, along with others, before the audit.

“The administration is shutting down nuclear plants in the South, while secretly planning to build a nuclear plant in the North,” Kim Chong-in, acting leader of the PPP, said Friday in a statement. “This is a horrifying act benefiting the enemy.”

Kim urged the prosecution to investigate the discovery, claiming that higher officials of the administration must have ordered the ministry workers to destroy files en masse to conceal the North Korea project.

“Kim claimed that the administration made a secret promise to the North to build a nuclear plant,” Kang Min-seok, Moon’s spokesman, said Friday evening. “He even said the government acted to benefit the enemy. This is groundless.”

Kang said Kim spoke irresponsibly to agitate the voters ahead of the April by-elections. “The government will strongly counter his remarks, including with a libel suit,” Kang said.