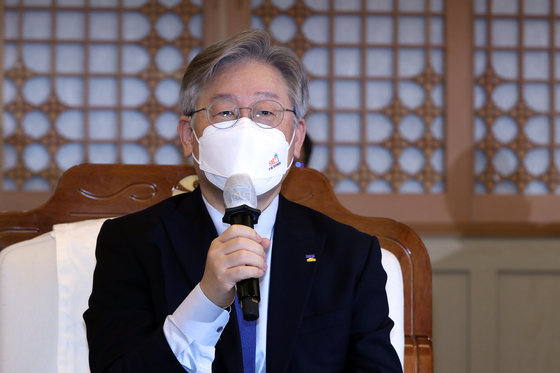 Gyeonggi Gov. Lee Jae-myung at a press conference in Gwangju on Jan. 29. [YONHAP]

“The Republic of Korea is a model democracy in East Asia that advocates and guarantees the basic human rights of individuals,” Lee wrote in a letter to the Tom Lantos Human Rights Commission of the U.S. Congress on Friday. "Freedom of expression is also guaranteed to the fullest extent possible as a basic human right [...]

“The North Korea Leaflet Prohibition Act is essential for the protection of the lives, safety and property of Gyeonggi residents.”

Lee's letter was sent in advance of a hearing by the Tom Lantos Human Rights Commission of the U.S. Congress, which is likely to be held in February, to discuss alleged suppression of civil liberties by the South Korean government. Park Sang-hak, a North Korean defector who leads a group in Korea that regularly dispatched propaganda leaflets over the border, traveled to the U.S. on Jan. 27 to attend the hearing and testify as a witness.

The North Korea Leaflet Prohibition Act was passed by the National Assembly last month and stipulates a prison sentence of up to three years, or a fine of up to 30 million won ($27,000), for distributing items like leaflets, printouts, money or electronic storage devices to North Koreans or to North Korean territory, directly through the inter-Korean border or through a third country.

Although South Korea's government stopped its own propaganda campaigns as a result of an inter-Korean compromise in 2000, civic groups in the South — many of them run by defectors from the North — continued to dispatch anti-Pyongyang propaganda across the border.

In October 2014, balloons containing leaflets dispatched by an activist group prompted the North to fire several anti-aircraft rounds toward Yeoncheon County in Gyeonggi.

“The distribution of anti-Pyongyang leaflets in areas near the border, such as Paju City and Yeoncheon County, is an act that precipitates a real threat to the lives, safety and property of Gyeonggi residents,” Lee wrote. “Whenever such leaflets are released, our residents suffer fear and trepidation.”

Seoul took action to ban the leaflets after Pyongyang severed official dialogue with the South, unilaterally demolishing the inter-Korean liaison office in Kaesong, blaming in part the leaflets dispatched across the border.

Many legislators in the United States were critical of the anti-leaflet act, calling it an infringement on the freedom of expression.

Republican Rep. Chris Smith warned prior to the law’s passage by South Korea’s National Assembly that a hearing would be held by the Tom Lantos Human Rights Commission to discuss alleged suppression of civil liberties by the South Korean government. The move would be a rare example of U.S. lawmakers taking steps to censure the actions of a key ally.

“Some U.S. representatives have raised the issue of the North Korean Leaflet Prohibition Act, and the United Nations Special Rapporteur on North Korean Human Rights has even requested the amendment of the act,” Lee wrote, describing some of the international responses to the act.

“These responses come without consideration of the aforementioned and sorrowful realities of the Korean Peninsula,” he added. “Gyeonggi Province welcomes the [act] and appeals to you, Excellency, to join us in the protection of the lives, safety and property of the people of Gyeonggi Province [...] please recall that the [act] is not about freedom of expression, but instead about war and peace between people living in a divided country.”

Lee sent a similar letter to the United Nations, according to the Gyeonggi provincial government.