Stocks rally as investors get over the Gamestop frenzy

Stocks rally as investors get over the Gamestop frenzy 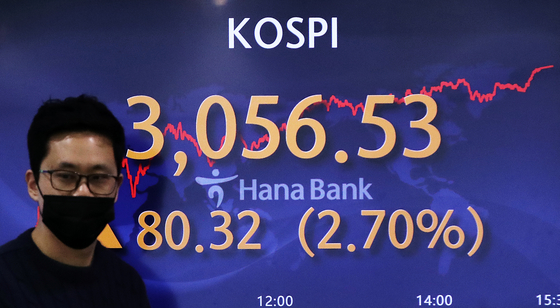 A screen shows the final figure for the Kospi in a dealing room in Hana Bank in Jung District, central Seoul, on Monday. The Kospi climbed back over the 3,000-point threshold after dropping below the previous session on Friday. [NEWS 1]


Korean stocks closed back over the 3,000 Monday, led by foreign and institutional buying and strong advances by bio shares. The won rose against the dollar.

Early morning trading was choppy, partially influenced by the stock frenzy related to U.S. video game vendor Gamestop that dragged down the S&P 500 index by 1.9 percent the previous session.

But the key index rebounded as foreigners and institutions turned net buyers after a four-day selling streak. Last week, the Kospi tumbled 5.24 percent, closing the week below the 2,900-mark for the first time since Jan. 6.

"Investor sentiment (in the local markets) seems to have mostly recovered from (last week's) plunge," he added.

The local currency closed at 1,116.5 won per dollar, down 2.3 won from the previous session's close.