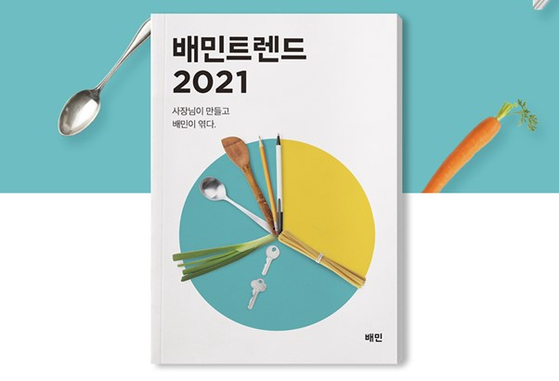 Woowa Brothers’ trend report will be available to the public on its website on Feb. 8. [WOOWA BROTHERS]

One in four restaurant operators chose eco-friendly packaging for the delivery of food, according to data from Baemin Mart, the company’s online market platform. Their motive was to reduce customer guilt.

Another trend was the increasing demand for vegan food.

The number of vegan dishes ordered via the app jumped almost four-fold from September 2019 through December 2020. The reasons are a growing preference for healthier lifestyles and to make ethical choices, according to Woowa Brothers.

The report further showed that Baemin users placed orders via the app five times per month on average. Last year, they ordered from 35 stores on average, and 95.2 percent of users paid through the app — a similar level from last the previous year.

“In 2019, the top 100 menus accounted for 31.9 percent of all orders,” said the company in a statement. “But last year, the proportion fell to 27.4 percent, as the diversity of meals registered on the app has become wider.”

The report added that tteokguk, — a soup made with sticky rice cakes and a dish people eat on Lunar New Year’s day — diet and strawberries were some of the most-searched words on the app in January.