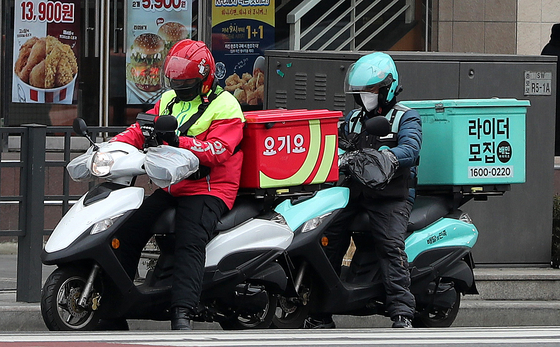 
It was a long road for Delivery Hero in its acquisition of Woowa Brothers, which runs Korea's most popular food delivery app.

The Berlin-based company's initial attempt, made in the first half of 2019, was rebuffed by Woowa Brothers. Once a deal was finally signed, the Fair Trade Commission (FTC) objected, citing concerns about the creation of monopoly.

If the company added Baedal Minjok — the Woowa Brothers app — to its portfolio, it would have had a lock on the market, as it already controls Yogiyo, the second most popular delivery app, and smaller Baedaltong.

On Dec. 28, Delivery Hero received conditional approval from the FTC to acquire 88 percent of Woowa Brothers. But the approval requires it to divest itself of Delivery Hero Korea, which owns Yogiyo.

This means that the German company will have to sell an asset to gain an asset, though the FTC allowed it to keep its stake in Baedaltong.

Delivery Hero, which agreed to pay $4 billion in the acquisition of Woowa Bothers, accepted the FTC's decision.


Q. Why did the FTC grant approval to Delivery Hero with conditions?

A. The FTC granted a conditional approval because of monopoly concerns. According to FTC regulations, a monopoly is created if a company meets three conditions: it has more than a 50-percent market share; it is a market leader; and it has a market share that is at least 25 percent higher than that of the runner-up.

The combined market shares of Woowa Brothers and Delivery Hero in the delivery market was 99.2 percent last year based on total transactions. Kakao followed as a distant second.

With a monopoly, a company can control prices and cause harm to the consumer and the market in general.

Delivery Hero accepted the FTC’s conditions for the acquisition of Woowa Brothers, although it protested.

“We are deeply saddened by the required condition to divest Delivery Hero’s subsidiary Delivery Hero Korea in South Korea,” Niklas Östberg, CEO and co-founder of Delivery Hero, said in a press statement released on Dec. 28.


Q. Why is Delivery Hero acquiring Woowa Brothers? What is its plan following the acquisition?

A primary reason for the acquisition is for Delivery Hero to expand business in Asia. In addition to acquiring 88 percent of Woowa Brothers, the transaction includes the establishment of Woowa DH Asia in Singapore. This entity will manage Delivery Hero operations in the region, including Baedal Minjok.

Kim Bong-jin, CEO and founder of Woowa Brothers, will be appointed chairman of the board of Woowa DH Asia and sit as its executive director.

Another reason behind the acquisition is the logistics systems and marketing capacity of Woowa Brothers, which DH expects could help raise its service quality, according to the FTC. Woowahan Youths, a Woowa Brothers subsidiary, operates a delivery driving service known as Baemin Riders.

Woowa Brothers' marketing seemed successful in Korea and Vietnam. It became the No. 2 in Vietnam since entering the market in June 2019. Singapore-based Grab Food is the market leader in Vietnam.

Eco bags and gimmicks — like the statement “I will protect the food under any circumstances” on raincoats — worked well in the country, Woowa Brothers claims. 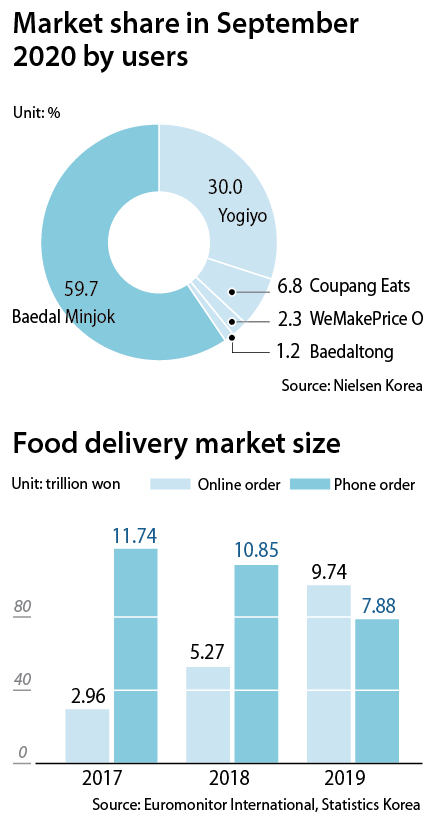 Q. How are restaurant operators responding to the FTC decision?

Restaurant owners argue the FTC should have rejected the deal. They say the acquisition will result in the company’s aggressive expansion instead of trying to coexist with restaurants. They also fear unilateral changes in contract terms or the increase in commissions they pay for selling food through the platform.

Following the FTC announcement, Kim Jong-min, secretary general of the Korea Franchisee Union said the FTC “should have disapproved of the deal.” He added that the association “does not welcome the decision” because Delivery Hero’s monopoly status would not change even once the deal goes through because Baedal Minjok still controls half the market.

As of last year, it controlled 59.7 percent of the food delivery market by the number of users, according to data from Nielsen Korea. Yogiyo had 30 percent.

Restaurants fear a monopoly will result in increased commissions for the use of the platform and a lack of transparency in terms of how the platform's algorithms search for and recommend restaurants.


Q. Tech companies are not happy about the FTC's decision. Why is that?

The Korea Startup Forum disagreed with the FTC decision, saying it could hamper foreign entry. On the day the FTC made the announcement, the forum said that it “feels sorry the FTC made such a decision despite objections by the industry and a lot of experts.”

“The FTC neglected the fact that any platform business operator can enter the food delivery market based on the network effect. The FTC decision will cause major damage to the valuation of local start-ups and their entry abroad. It will hamper innovative growth,” it added.


Q. Who are potential buyers of Yogiyo?

Naver currently owns 4.7 percent of Woowa Brothers. In Japan, its Line subsidiary operates food delivery platform Demae-can, which is No. 1 in the country by the number of participating restaurants. Line runs other food-related businesses abroad, like delivery service Lineman, review platform Wongnai in Thailand and Linespot in Taiwan.

In March 2017, KakaoTalk added a service that enables users to order from restaurants, while Coupang introduced Coupang Eats in 2019.

“Fulfilment has grown very important in logistics, and last-mile delivery could be the last puzzle that could complete a logistics system for some companies like Naver, which recently signed a strategic partnership with CJ Logistics,” said Seo Yong-gu, a professor of business administration at Sookmyung Women’s University.

“It is likely for Naver to push the deal [to acquire Yogiyo] in that it can create synergy effects with less-known platforms it already operates, like making reservations for accommodations and restaurants,” said analyst Kim Hyun-yong from Hyundai Motor Securities. “Kakao is expected to narrow the gap with the market leader by connecting [Yogiyo services] through KakaoTalk. There is also a possibility for Coupang to acquire it, as it is expanding businesses.”