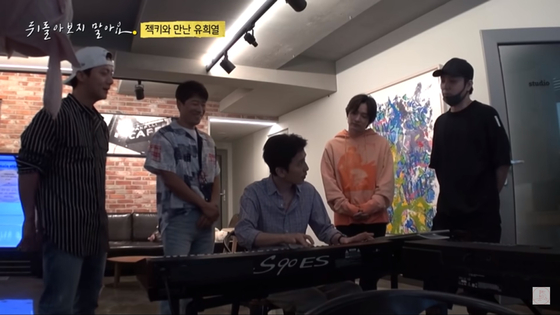 A captured image of Sechs Kies members and Yoo Hee-yeol, center, as they work on an upcoming track. [SCREEN CAPTURE]


Idol group Sechskies is in talks with an unlikely outlet for the release of its new song on Feb. 5 — retailer Emart.

The idea is being floated after TV producer Na Young-seok of CJ E&M, who has been sharing the entire process of song-making with Sechskies through YouTube, made a request to Chung Yong-jin, vice chairman of Shinsegae Group, through social media that the track be played at Emart at closing time.

Emart responded that it welcomed the idea, which if it comes to fruition, will be the first for any K-pop group.

The retailer is said to be in talks with the group to play the new song titled “Don’t Look Back,” composed by Antenna Music’s Yoo Hee-yeol, at over 130 Emarts across the country to signal the closing time of the retailer at 9 p.m. The retailer is positive about making it happen, according to the JoongAng Ilbo, an affiliate of the Korea JoongAng Daily, on Monday.

Buy the most wonderful time