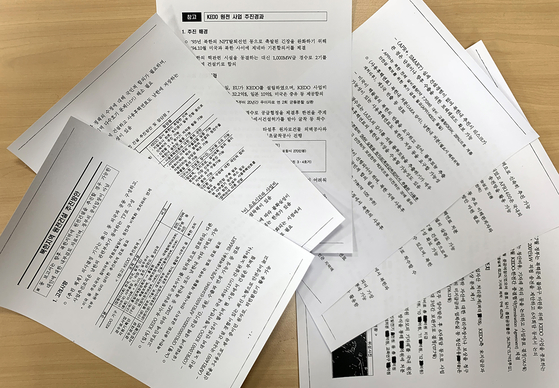 The six-page document created by the Ministry of Trade, Industry and Energy in May 2018 contains proposals for energy supplies to North Korea. [YONHAP]

The Ministry of Trade, Industry and Energy released a document at the center of a controversy about South Korea possibly offering a nuclear power plant to North Korea.

But it did not say who wrote it — or at what level of government it came from.

The document, entitled “Plan to push forward a nuclear plant's construction in North Korea,” was made public at 7:15 p.m. Monday.

According to the ministry, the document was written in May 2018, directly after President Moon Jae-in and North Korea’s leader Kim Jong-un met in their first summit in the border village of Panmunjom on April 27.

The ministry said the document was created to present ideas for economic cooperation between the two Koreas and did not contain official government policies. It said it regrets claims that the Moon Jae-in government secretly pursued the construction of a nuclear plant in North Korea, and that disclosure of the documents should end any controversy.

The six-page document contained three scenarios and pros and cons for each.

The first proposal suggested building a nuclear plant in North Korea in Kumho, South Hamgyong, where the Korean Peninsula Energy Development Organization (KEDO) worked on a light water reactor project for 11 years before scrapping it in 2006.

The report noted that nuclear power plant construction could be proceed swiftly thanks to the preliminary work already done including a geological survey.

It noted that nuclear reactors for South Korea’s Shin Hanul 3 and 4 nuclear plants could be used for the plant in North Korea. In October 2017, the government halted construction of Shin Hanul 3 and 4 as part of its policy of weaning Korea off nuclear energy.

The biggest challenge was nuclear material control, the report said, which would need the agreement of various parties including the U.S.

The second proposal was building a nuclear plant within the demilitarized zone (DMZ). The plant would include an APR+ reactor or the System-integrated Modular Advanced Reactor (Smart).

If a plant was built in the DMZ, the South Korean government would have more control over the nuclear materials compared to a plant in North Korean territory.

However, the project would need preliminary work including a geological survey as well as setting up a new power line to North Korea.

The final proposal was to restart construction on the Shin Hanul 3 and 4 reactors and send power from them to North Korea through a power line set up along the east coast of the Peninsula.

The pros of that proposal included all the work already done, and the strong control Seoul would have over nuclear materials.  That proposal could save up to 500 billion won ($447 million) in costs.

The down side was the idea would contradict the Moon government’s policy of phasing out of nuclear power for safety reasons.

The first page of the document emphasizes that it is an internal document and not the official position of the government.