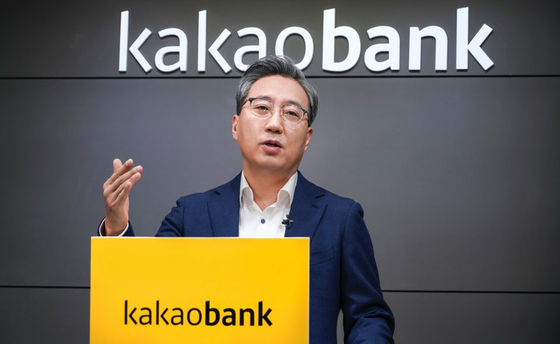 KakaoBank will increase loans to people with poor credit in the latter half of the year.

“We can’t tell exactly how much will be offered yet, but I’m sure the amount will be a huge increase from the previous year,” said Yoon Ho-young, CEO of the internet-only bank during an online press briefing held Tuesday.

Yoon said the bank is developing a new, more complex, credit scoring system that allows it to determine who it will lend to among people with poor credit or thin filers, those with not enough credit data. The bank will use financial and non-financial data from its past businesses as well as from other Kakao companies to improve its credit scoring system.

There has been criticism that the internet bank is mostly targeting customers with good credit, which goes against its original pledge that it will strive to serve those with poor credit but still the capacity to repay.

The bank said at its formation that it will distinguish between people who are likely to pay back loans considering their usual spending habits even if their credit is poor for some personal reasons and grant them loans at interest rates lower than loan sharks but slightly higher than at commercial banks.

Loans to people on fifth and sixth credit level only received 1.37 percent, while those with worse credit only received 0.17 percent.

To expand loans to lower credit customers, it has been putting efforts into slowing the growth of lending to customers with strong credit. Last month, it lowered the upper cap on unsecured loans for creditworthy customers from 150 million won to 100 million won.

“We don’t think it will be possible within the first half of the year,” he said. “But we plan to go public within this year to secure capital.”

KakaoBank released last year’s earnings on Tuesday. Its net profit for 2020 amounted to 113.6 billion won, a roughly 100-billion-won increase from 2019, when it turned profitable for the first time, with a net profit of 13.7 billion won.