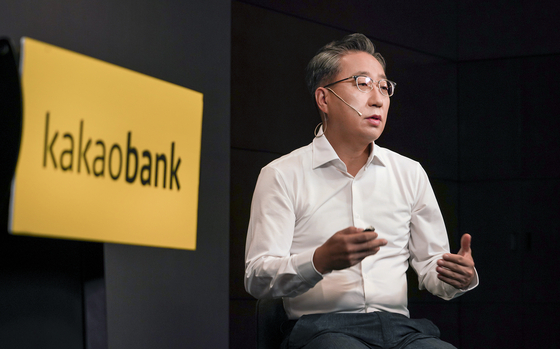 
KakaoBank’s IPO pricing is justified, CEO Yun Ho-young insists, even though the relatively young venture will be the third largest financial institution in the country upon listing.

He says it should be valued more like a foreign fintech than an old-school domestic competitor.

"As a mobile-only bank, we were very different in nature from the beginning compared with other existing banks," he said. “We think of ourselves as venturing into a new sector that has not existed before."

The internet-only bank hopes to sell 65.45 million new shares priced between 33,000 won ($28.7) and 39,000 won, and list as a Kospi constituent on Aug. 6. If the upper end of the price band is hit, its market capitalization will be 18.5 trillion won right off the bat, making it the No. 3 financial institution in Korea after KB Financial Group and Shinhan Financial Group.

During a briefing Tuesday, Yun said that the company used foreign financial tech company valuations to arrive at the price rather than local banks.

Following a number of volatile IPOs in Korea, regulators and investors in general have started to take a closer look at pricing. They are wary of out-of-whack valuations that might result in poor performance in the market.

KakaoBank is going to great lengths to explain its pricing.

"People thought mobile-only banking wouldn’t be possible, but we are proving it's possible by turning around to profit in just one and a half years after operation and attracting over 16.15 million customers to our platform," Yun said. "After the planned listing, the bank will further evolve based on massive capital."

Yoon said the company’s goal is to become the No.1 retail bank in Korea.

"To me, the No.1 retail bank means a bank that's used most frequently by the most number of customers, not necessarily having the most assets," Yun said. "In that respect, KakaoBank is already the top financial app in Korea in terms of monthly active users."

It is hoping to further increase its user base by adding additional loan programs, including those offering mortgages and loans targeting the self-employed.

"We are planning to start offering mortgages this year, or at the beginning of next year at the latest," Yun said. "Like all our other programs, we believe mortgages can also be processed fully on mobile devices."

The bank said it will also start new businesses for foreign customers to broaden its user base, but did not detail what kind of service will be offered.
Yun said the company will increase the number of partnering companies, such as securities companies, retailers and card companies, while introducing new financial products related to wealth management, funds, insurance and foreign currencies.

The bank's chief shared his plans to enter global markets with funds raised through the IPO.

"In the past, some companies in Asia had asked us about setting up mobile banks in a foreign country in the form of a joint venture, but at the time we weren't able to really respond due to lack of capital and our focus on the domestic market," Yun said. "But as we are raising funds through the IPO, if those opportunities come to us once again, and I believe there will be, we will positively review the plans."

As for acquisition plans, Yun said the bank is considering forming joint ventures with small fintech companies and equity investments.
KakaoBank's public offering price will be announced on Thursday. Public subscriptions will take place on July 26 and 27.