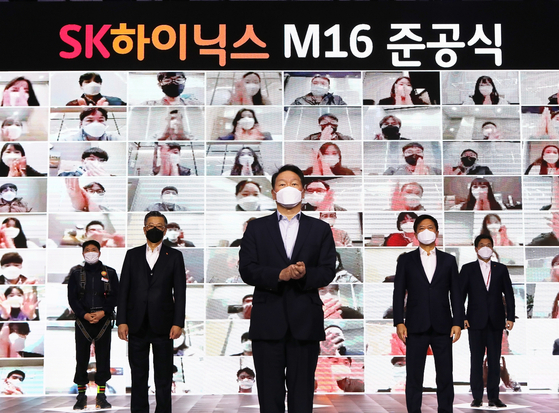 
At an event celebrating the completion of SK hynix’s new chip plant on Monday, SK Chairman Chey Tae-won vowed to donate some of his annual salary to employees at the chipmaker.

The decision to forgo about 3 billion won ($2.7 million) of payment from the chipmaker, which Chey earns as a director at the company, accentuates the sense of urgency to appease outraged hynix workers who cry foul over what they see as a poor and opaque incentive payment system.

SK hynix notified workers last month that they would receive a bonus worth 20 percent of their annual salary in a profit sharing plan. The annual bonus check is given when the company achieves a predetermined performance target.

Employees were quick to protest the bonus amount, saying that the percentage is the same as 2019 when operating profit at the unit was almost half the 2020 record.

The chip manufacturer recorded 2.7 trillion won in operating profit in 2019, due partly to plunging prices across semiconductor products. The figure rebounded to 5 trillion won last year as the cyclical upturn in the industry boosted prices.

To up the ante, some workers cited Samsung Electronics' 47 percent bonus.

Others pointed out that a more fundamental problem lies in the lack of communication over how the annual bonus is determined.

Skeptics pointed out that Chey’s grand gesture only actually equated to about 100,000 won in the pockets of each of the 28,000 hynix employees.

“I feel disheartened to see employees being disappointed about the bonus that failed to meet expectations,” the CEO said in a letter to employees.

“We will announce a projected bonus ratio in the middle of the year to better communicate [with employees]."

A spokesperson at SK hynix explained that the company’s bonus ratio is determined by economic value added (EVA), not operating profit.

“Employees could feel that the bonus is not enough compared to the operating profit,” the spokesperson said, “But the ratio as the result of EVA, as we’ve done so far.”

The spokesperson said that the components of EVA differ every year, which makes it hard to unveil a specific formula of calculation.

The 20 percent bonus given for 2019, however, was exceptional, because it was not based on EVA and intended to enhance morale of the workforce amid challenging business conditions that year, according to the spokesperson.

Samsung’s chip division launched a recruitment notice for experienced engineers on Monday, although it is unclear whether the timing is intended to capitalize on the rift at hynix.