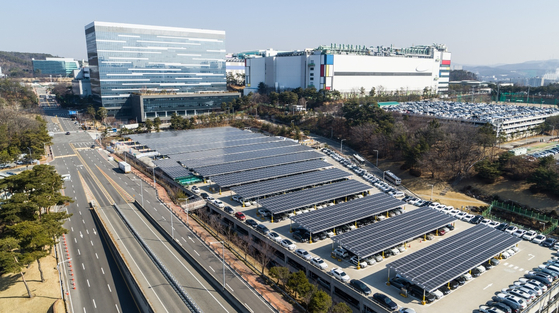 
High-tech products quietly wow us without the slightest hint of emissions. The reality is very different, and much more worrying. Behind the scenes and in the factories, all the energy that goes into these cutting edge products adds up and leaves society paying a remarkable hidden price.

The many steps involved in the manufacturing of high-end chips, which lie at the core of future products, are resource intensive and generate carbon dioxide emissions and other gases. Each high-precision maneuver is an exercise that takes a small toll on the planet, and collectively they have a significant impact given the scale of production and the obsessive packing of more computing power on each wafer.

As tech companies like Samsung Electronics, TSMC and Intel engage in an arms race to build up chip-production capacity, their mega-investments have a mega carbon footprint. The wonderfully clean looking facilities that show up and silently go about their work deserve as much scrutiny as smoke belching manufacturing facilities and the clear-cutting of the Amazon.

It's not just chip making. The making of display panels has a huge impact. Data centers are also a problem, as they suck up energy to maintain and move petabytes of information.

SK hynix has signed up for RE100, a global initiative where corporations pledge to meet the 100-percent-renewable-energy goal by 2050. Samsung Electronics has yet to join RE100 but promised to attain carbon neutrality by 2050 in a joint statement released in March with other industry players, like LG Electronics, SK hynix and LG Display.

The moves are in line with the environmental pushes by major manufactures including Apple, Google, Facebook and Taiwan's TSMC, all of which are signed up with RE100. 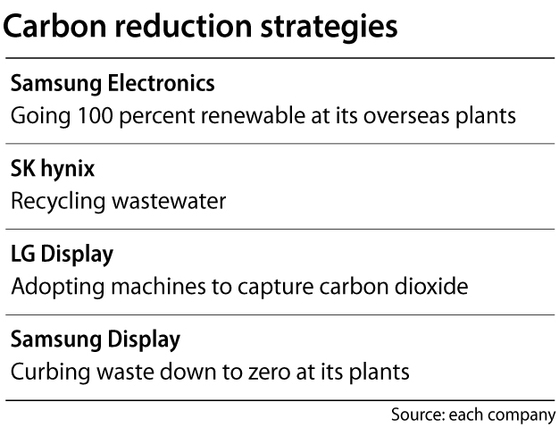 Churning out everything from home appliances to smartphones, Samsung Electronics is the eighth largest contributor of greenhouse gas emissions in Korea, according to the Ministry of Environment.

The electronics maker produced 14.6 million metric tons of carbon dioxide emissions in first quarter, up 4.3 percent on year, according to a public disclosure.

Semiconductors are probably the greatest contributor, through the company doesn't segment its emissions.

"Semiconductor manufacturing contributed to increasing greenhouse gases in multiple ways, and advanced fabrication techniques such as extreme ultraviolet lithography (EUV) tend to require more resources including water and electricity, which in turn generates a larger quantity of greenhouse gases," according Nam Sang-Uk, an associate research fellow at the Korea Institute for Industrial Economics and Trade (KIET).

Chipmakers directly emit greenhouse gases from the use of fossil fuels and the emission of chemicals such as hydrofluorocarbons (HFCs) and perfluorocarbons (PECs) generated in the manufacturing process.

"The growing production of semiconductor and display products dramatically increased the volume of the fluorine-based greenhouse gases during the period," according to a report released by Greenhouse Gas Inventory and Research Center, a research institute under the Environment Ministry.

The companies also indirectly release the gases through electricity used at production facilities, which typically run around the clock.

Since ditching greenhouse chemicals altogether in the chip and electronics manufacture is hard to achieve in the short run, local chipmakers are focusing on tapping renewable energy sources in providing electricity required to operate their factories and office buildings.

Samsung Electronics started moving to renewables at all its overseas facilities in the United States, Europe and China in 2018, with the goal of being 100 percent renewable at these sites by 2020. The company met the goal last year and vowed to replicate the practice in Korea.

"The key overseas facilities are fully powered by renewable energy," a spokesperson at Samsung Electronics said.

With the initiative in place, total renewable energy use by the company increased 14-fold in two year from 2017, from 229 gigawatt hours to 3,220 gigawatt hours in 2019.

"We aim to extend the deployment of renewable energy in Korea by setting up solar power panels at our office buildings," the spokesperson said.

On its home turf, the company has installed solar and geothermal facilities in parking lots and on the roofs of buildings in Suwon, Hwaseong, and Pyeongtaek, Gyeonggi.

The energy generated by the local installations totalled 2,847 megawatt hours, according to the company. Still, the amount is not sufficient to run energy-intensive chip plants.

"The semiconductor factories require stable flow of electricity around the clock, and any disruption in the supply could risk hampering the chip fabrication and generating financial losses," said a spokesperson at Samsung Electronics.

Renewable electricity from renewable sources is used for lighting and air conditioning at office buildings.

SK hynix aims to go 100 percent renewable at its manufacturing unit in China by 2022. The chipmaker also pledged last year to power all operations with renewable energy by 2050 through the RE100 initiative.

In the beginning stage, it zeroes in on recycling a significant amount of water. Its wastewater recycling system resupplies the used water by filtering it to the level of industrial water.

SK hynix reused 5,000 tons of water per day at its Icheon complex in Gyeonggi and 2,800 tons at plants in Chengju, North Chungcheong.

A typical chip manufacturing plant uses each day between 60,000 tons to 130,000 tons of extremely pure water, also called ultra-pure water, and the treatment of wastewater in such quantities could add the emissions both directly and indirectly.

"We are looking to increase the amount of water reused to 800,000 tons going forward," a spokesperson at SK hynix said, adding that the company also plans to adopt nitrogen oxide reduction technology to cut its carbon footprint. 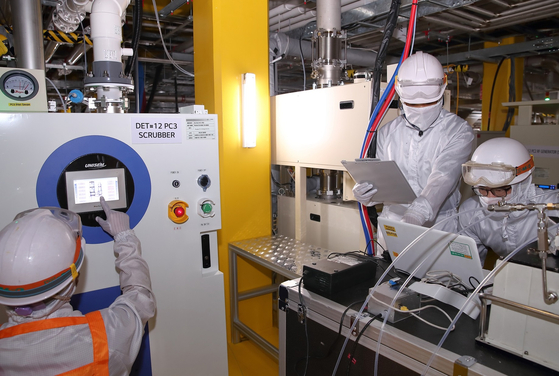 LG Display was the 18th largest contributor of greenhouse gases in 2019, according to the Ministry of Environment, at 5.9 million metric tons. Samsung Display was No. 23 at 4.8 million tons.

Nam, the KIET researcher, said the amount of electricity used to make film transistors for OLEDs is two-and-a-half times more than for LCDs.

"As the demand for larger screens grows, it affects the size of equipment across the process, including vacuum chambers and logistics," Nam said.

LG Display is trying to mitigate its impact on environment by employing technologies to capture carbon dioxide. It invested 37 billion won into the installation of scrubbers, which absorbs carbon dioxide in the atmosphere.

"The company was able to cut 90 percent of greenhouse gases released in the atmosphere," said a spokesperson at LG Display.

The funding also went into replacing some of chemicals said to contribute to the greenhouse effect with alternative gases. The display maker stopped using sulfur hexafluoride, although LG Display declined to identify the gas replacing it.

Samsung Display is focusing on curbing waste almost down to zero at its plants. The company was credited with attaining a 100-percent landfill diversion rate last year at one of its production facilities in Asan, which means it added zero waste to landfill site.

"To realize carbon neutrality, we need innovations at the fundamental level," said Kim Seong-jin, vice chairman at Korea Display Industry Association, during the event celebrating the joint endeavor in March.

"The top priorities include the development of techniques capable of cutting carbon emissions and the replacement of greenhouse gases with more eco-friendly substances," he said.