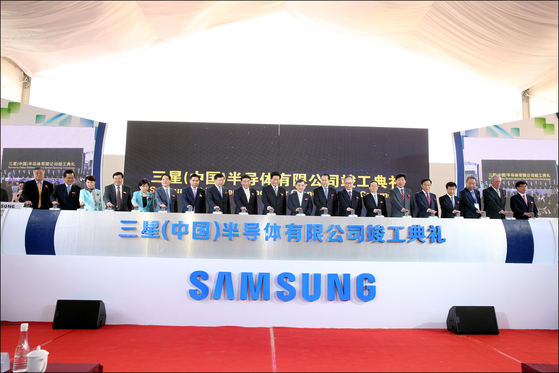 Representatives at Samsung Electronics and Chinese government officials celebrate the operation of a chip plant in 2014. [SAMSUNG ELECTRONICS]


Chipmakers may not have the luxury of strategic ambiguity as the United States considers upping restrictions on the export of key components and technology to China.

Samsung Electronics and SK hynix are likely to have no choice but to limit their exposure to China where they already have major semiconductor manufacturing facilities. While the Korean government is careful not to take sides in the ongoing “arms race” in chip production between the world’s two largest economies, Korean chipmakers are broadly aligning themselves with the direction set by the U.S. government.

“The fact that Samsung Electronics and SK hynix cut off their chip supply to Huawei last year, following the Trump-era sanctions, shows that they move in sync with the U.S. policy,” said a source in the semiconductor industry who requested anonymity.

“They won’t explicitly mention that they side with the U.S., but have acted on that way because the U.S. and its allies like Japan and the Netherlands have a strong grip on high-end chip fabrication tools and parts,” the source said.

Last year, the U.S. government prohibited the sale of components in which U.S. technology is used to Huawei and Semiconductor Manufacturing International Corporation (SMIC).

These restrictions have made it almost impossible for the Korea companies to deal with the Chinese companies targeted given the extent to which the United States and allies have a lock on key semiconductor technology.

“The U.S. influence in the semiconductor equipment is substantial, dominating the majority of market share,” said a source from a local equipment manufacturer.

The last facility investments made by the Korean companies on Chinese soil dates back to 2019, when then-U.S. President Donald Trump had yet to tighten the export of U.S.-made semiconductor equipment to China.

Samsung Electronics announced an $8 billion investment into its chip plant in Xian in 2019 to expand NAND flash memory capacity. The company is currently at the stage of stacking chip-making machines.

SK hynix completed expansion of its dynamic random access memory (DRAM) plant in Wuxi the same year, after spending 950 billion won on the facility there.

“SK hynix has no plan to scale up production capacity of its DRAM plants in Wuxi,” said a source with the knowledge of the matter.

China has been a favored destination for memory chip production lines as a result of the country’s relatively low property prices and labor costs. For both Samsung Electronics and SK hynix, China is the only country outside of Korea to house their memory chip plants.

Their plans for investment in China now hinge on the new administration’s moves, and the Biden administration could mount a more extensive campaign to curb exports on wide range of technologies.

A policy recommendation drafted by the National Security Commission on Artificial Intelligence, a U.S. Congress advisory committee chaired by former Google CEO Eric Schmidt, called for the U.S. government to work with allies to block key semiconductor fabrication devices from being supplied to China.

“The Departments of State and Commerce should work with the governments of the Netherlands and Japan to align the export licensing processes of all three countries regarding high-end semiconductor manufacturing equipment, particularly extreme ultraviolet (EUV) and argon fluoride immersion lithography equipment, toward a policy of presumptive denial of licenses for exports of such equipment to China,” read the report released last month.

The proposal is a step beyond existing sanctions that limit exports of EUV equipment, exclusively supplied by ASML of the Netherlands, to Chinese chipmakers.

If the government adds argon fluoride (ArF) immersion lithography equipment to the banned list, the move could affect the manufacturing of memory chips in China.

“The mainstream DRAM and NAND flash memory products are made based on the ArF technique,” said a source at a local memory chip maker.

“If the U.S. government extends the export restriction to include ArF immersion lithography, it is virtually impossible for Samsung Electronics and SK hynix to expand memory chip production in China because they can’t bring in the equipment critical for the manufacturing,” he said.

Samsung Electronics may not prioritize expansion in China since NAND flash memory is not currently in short supply.

The company has enough land in Pyeongtaek, Gyeonggi, where its P3 plant is already under construction, to build three more plants.