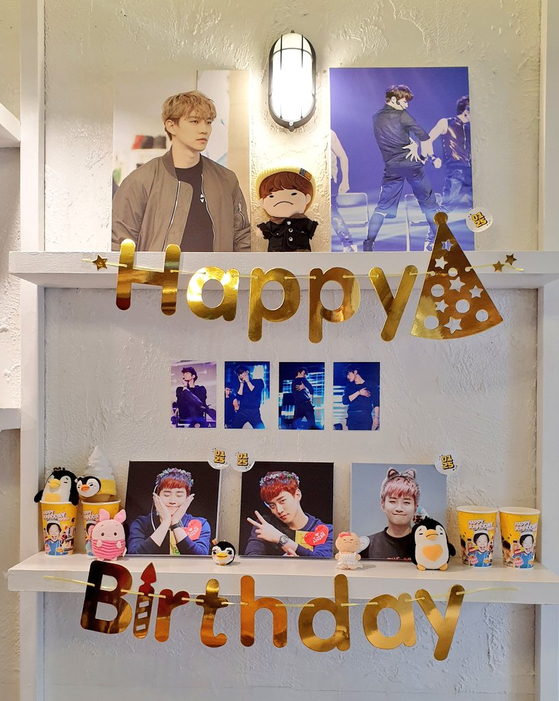 A cafe is decorated with pictures of K-pop stars taken by avid photographers referred to as ″homma.″ The framed pictures and other merchandise such as coffee cup sleeves are later sold to the fans who visit the cafe as a part of "birthday tours" to celebrate their favorite idols. [SCREEN CAPTURE]


On his birthday, followers gather together at a particular location, decorated with his face. They talk, laugh and share memories they have in front of shrines filled with items related to him. They spend the day on a pilgrimage around to similar places that celebrate the same event and take pictures in front of adverts and posters marking the day. This isn’t Christmas or Buddha’s birthday — this is the birthday of a K-pop idol.

For avid K-pop fans, concerts and fan meet-and-greets aren’t the only time of the year when they meet their fellow devotees. Birthdays are some of the biggest events on the calendar and are usually celebrated over a couple of days. 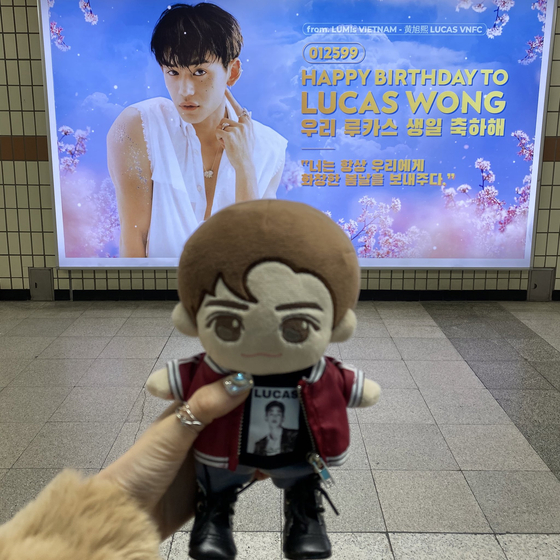 Fans take pictures of birthday ads in subway stations or other places as a part of the birthday tours. [SCREEN CAPTURE] 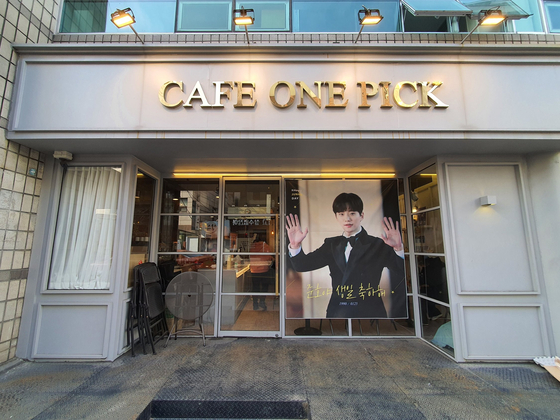 Cafe One Pick in southern Seoul rented out by fans of singer-actor Lee Jun-ho. [SCREEN CAPTURE]


These events begin at a cafe rented out by fans, usually by amateur photographers referred to as “homma.” The term is a portmanteau of home and master, and was first coined years ago when photographers would run their own personal websites to upload the pictures they took of their favorite stars. Homma usually use the money they earn from selling the pictures of merchandise made with such photos to rent the cafes, donate to fan clubs or run other events.

Different homma or other enthusiastic fans also rent out cafes, so it’s usually the case that when a star’s birthday nears, fans gather information about who is hosting which events at what cafes, and then spend hours touring to each spot. While on one of these birthday tours the fans make pit stops to take pictures of the birthday adverts posted on public transportation. To lure wandering fans, organizers often offer special edition goods, usually on a first come first served basis.

“I starting by booking the cafe in October,” said a fan of AB6IX member Lee Dae-hwi, who recently hosted a birthday gathering at a cafe in Hongdae to celebrate Lee's 20th birthday on Jan. 29. “Some cafes demand a rental fee, but many cafes that allow such events to take place are small and don’t see so many customers every day, so they’re happy to let us use their space on the condition that we sell the merchandise as a bundle with the drinks or other items from the cafe. It cost me around 700,000 won ($630) to make the goods and buy decorations and props.”

Before the Covid-19 pandemic, fans would even rent out cinema theaters, decorate the walls outside a screen with stars’ pictures and make coffee cup sleeves featuring the star's face to be sold at the theaters' shops. Because cafe owners and theater marketers know that such events are popular among fans, some even reach out and offer their spaces in advance. When it comes to the birthdays of big-name celebrities, competition for a space can be fierce. 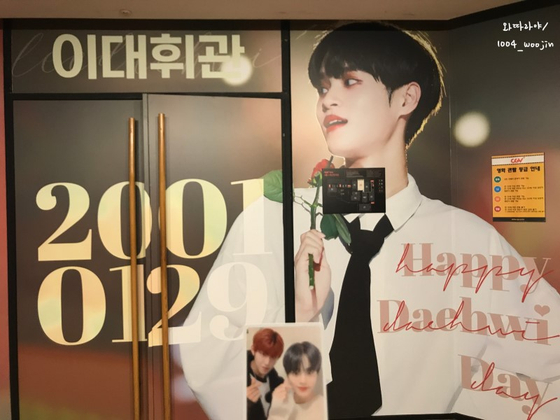 The ″Lee Dae-hwi Screen″ rented out by fans of AB6IX member Lee Dae-hwi last year to celebrate his birthday at a CGV cinema in Seoul. [SCREEN CAPTURE] 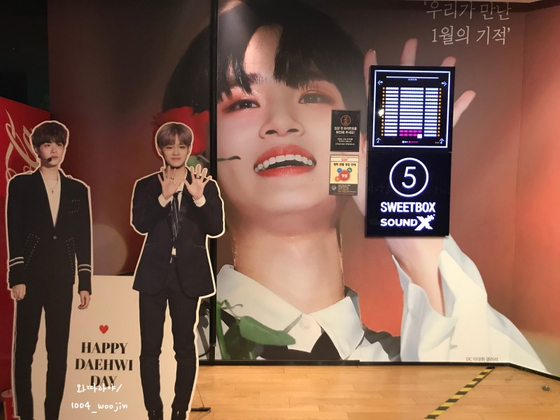 The ″Lee Dae-hwi Screen″ rented out by fans of AB6IX member Lee Dae-hwi last year to celebrate his birthday at a CGV cinema in Seoul. [SCREEN CAPTURE]


“It helps with the promotion of the cafe and the sales are higher than usual,” said the owner of Chris Garden, a cafe in Hongdae, that is frequently rented out for birthday events. “For fans, it’s about gathering and celebrating in the same space, but it’s helpful for the cafes as well. But the success of the event isn’t always equal to the size of the fandom, so there’s really no telling what the revenue will be."

The practice of renting out cafes first began in the early 2000s era of TVXQ. In particular, cafes near agencies were chosen as venues in the hopes that the stars themselves would pop in for a visit. In fact, just last weekend, AB6IX member Lee's mother paid a surprise visit to one of the cafes where a birthday event was being held in Hongdae and last year members of boy band CIX traveled around the cafes in the Hongdae neighborhood for their members’ birthdays.


While the core of the events lie in celebrating and congratulating a star on their birthday then posting about it online to let the celebrity know just how much their fans adore them, a big part is also directed at other members of the fandom. In the case of homma and hard-core fans, they like to show off their work and loyalty to the band or idols. Those who do not count themselves as either also want to prove that non-hard-core fans love the stars just as much.

“Birthday events have been held for quite some time, but have mostly been organized by agencies as fan meet-and-greets or by core members of fan clubs,” said Shin Yoon-hee, the author of “Fandom 3.0,” a book which takes a comprehensive look into the evolution of fandoms in Korea. “Yet through social media, it has become possible for individual fans to hold their own events and share the information online, which makes it easier for not-so-serious-fans and even just the general public to plan their trips to the cafes. It’s a form of solidarity among the fan community, as well as a symbol of independence of individual consumers.”

A cafe is decorated with pictures of K-pop stars. [SCREEN CAPTURE] 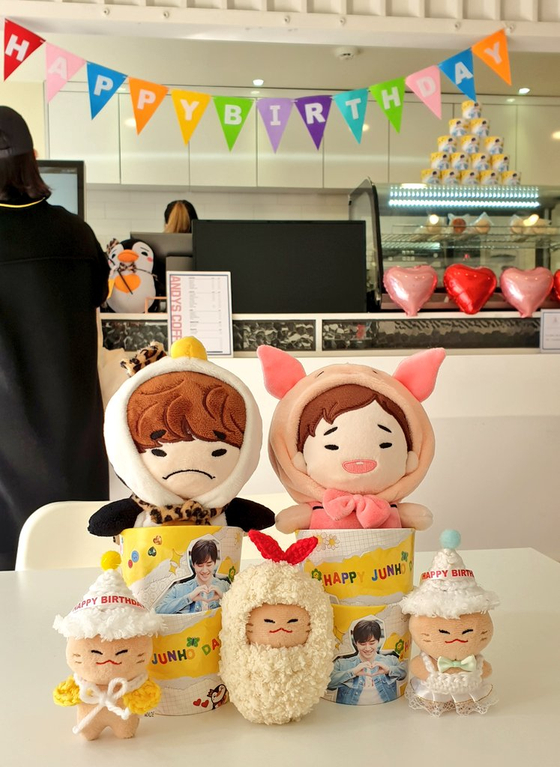 Goods created by fans of singer-actor Lee Jun-ho as a part of his birthday tour. [SCREEN CAPTURE]


According to Kim Jung-won, an ethnomusicologist teaching at Yonsei University, the practice has a resemblance to religion and the events are equivalent to religious rituals. K-pop fans celebrate the birthdays of the subjects of their worship without their presence as people would for Jesus and Buddha. Like religion, it has its dangers, but it's up to the individuals to take the positive aspects and enjoy the culture.

"People like and follow K-pop stars and in essence it's not much different from following religious leaders. This is a culture that’s here to stay and this is a ritual that’s not just unique to K-pop now — actors and other celebrities are getting their own rituals, too," said Kim. "It brings comfort to have a subject that you can trust and love, which is why you spend money, time and effort to express that sense of contentment. Artists return that favor usually through music, and that content again gives joy to fans, in a positive cycle. That leads to a deepened sense of trust and belief and the rituals continue."