Korea's economy will recover by Q2 next year: McKinsey

Korea's economy will recover by Q2 next year: McKinsey 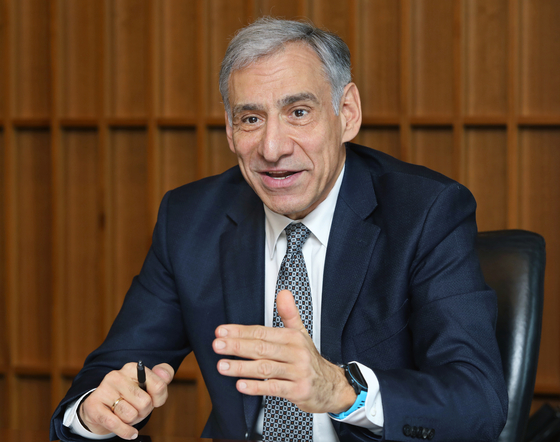 André Andonian, the new managing partner of McKinsey Korea, speaks during an interview with a group of reporters including the Korea JoongAng Daily at the consulting firm's office in Jung District, central Seoul, on Monday. [PARK SANG-MOON]


André Andonian, the new managing partner for the Korea office of global management consultancy firm McKinsey & Company, said he expects Korea's economy to return to the same level as before the coronavirus pandemic in the second quarter of 2022, based on the results of a McKinsey survey on global executives.

This is a quarter faster than the rest of the world, Andonian said, as he sat down for an interview with a group of reporters including the Korea JoongAng Daily in Seoul on Monday, though the timeline could always be affected by a delay in the delivery of vaccines or the spread of Covid-19 variations.

Andonian said the time has come for a paradigm shift in Korea, such as automotive companies changing their focus from solely making cars to offering broader mobility services, energy companies shifting toward renewable energies and pharmaceutical companies thinking of digital health care solutions.

"Covid-19 creates new opportunities in an accelerated way," he said. "And therefore, reimagining the new normal, the new future and acting on that would create many opportunities for the industry and for the companies."

Andonian advised the Korean government to look to improve overall productivity of industries, rather than simply increasing the number of jobs, referring to the recently announced government objective to create one million jobs itself in 2021.

"It is not a solution just to simply hire more people — ideally, it should be productivity that should increase," Andonian said. "Besides quantity, quality of jobs is also very important."

While he served for five years as the head of the consulting firm's Japan office before moving to Korea this year, Andonian said he is "really hoping there can be a solution that benefits the people on both sides," on sour trade relations between Korea and Japan affected by political and historical tensions between the two countries.

The following are edited excerpts from the recent interview.


Q. The world seems to be recovering from the shocks of the Covid-19 pandemic.

A. The year 2021 will be a year of transition and at McKinsey, we regularly survey economic global executives about the sentiments of the crisis and try to tabulate their opinions into different scenarios. The picture is that the worst scenarios have been avoided so far, but at the same time the best scenarios. So it's not going to be a simple U-shaped recovery, so it will take a bit longer.

Based on the most likely scenario, we expect that in the second quarter of 2021, the transition toward normality will happen in the United States due to the success of the vaccination. And herd immunity from an epidemiological perspective will be reached in the third and fourth quarter of this year.

The emergence of new virus strains and the slower start of vaccine rollout may pose additional risks and the whole schedule may take one year longer if that happens. For Korea, it would mean that getting to the same level where Korea was before Covid-19 will probably be in the second quarter of 2022, which is faster than the world. For the world, we expect the third quarter of 2022.


Q. What are important strategies for companies to overcome the effects of the pandemic?

A. It's a defining moment for all companies. Our research shows that in times of crisis, the gap between high performers and laggards increases. So those who take the right steps can increase their competitive distance.

The companies who were better prepared in terms of having technology, establishing the infrastructure, [more easily] able to work remotely, have remote access and linked to their customers and to their suppliers — they started out better.

In terms of the measures the winners are taking, it's like playing the piano but using all the keys. That means all the keys that exist. So starting from more aggressive resource allocation and more aggressively pursuing mergers and acquisitions.

Secondly, seeking out to become functionally excellent. Also, creating new businesses that digital offers as an opportunity, being more agile and faster in terms of decision-making and equipping their workforce with new capabilities at scale.


Q. What is your advice for Korean companies to prepare for the post-Covid-19 era?

A. My perspective is that Korea has been very strong in the past in the industrial segments and now Korea can use its strength to do a paradigm shift. The important thing is to set bold aspirations and to be aware that post-Covid, there will be a new normal, like pharmaceutical [companies] trying to think about digital health solutions, consumer goods [companies thinking] about digital platforms and energy and materials as I mentioned before, about the transition to renewables, even about using technology in banking.

What I can say from my individual meetings, I was very encouraged by the high aspirations of the chairmen. I cannot judge yet how it is shared in the entire company, but that's a prerequisite. And then the aspirations should include all relevant aspects including the portfolio, merger and acquisition roadmap, business processes and the organization.

And the success factor will again be digital adoption. Actually, statistics show that 70 percent of companies hoping for a digital transformation fall into what we call a pilot trap — they do one pilot and they don't scale further — because they have not thought of the true architecture of the change it should look like.


Q. How prepared do you think Korean companies are in terms of digital adoption?

A. First of all, Korea is one of the leaders in the world in terms of adoption rates of digital products — like smartphone ownership is 95 percent, internet usage is 96 percent and the digital banking penetration rate is 99 percent, the highest in Asia.

Korea has also excellent products in 5G, smartphones and semiconductors, for example. It has a high rank in terms of a mature digital market, in the IMD's [Institute for Management Development] Digital Competitiveness Ranking, it's No. 8 in 2020. And out of the world's 518 unicorns — start-ups with high valuations — Korea has 11, which is quite high, and in this case higher than Japan. Japan only has four.

However, there is room for improvement. As I mentioned earlier, it's a transition into software, transition to solutions. It's a question where, for example, Samsung or LG could also be leaders in apps, on content rather than the product itself.

Regulators have an important role in this new digital era, to make sure that the relevant context is set so companies can test and learn quickly and there are adequate regulations.


Q. What industries do you think have good prospects post-Covid?

A. E-commerce is very important. Only 60 percent of consumer goods companies are moderately ready to capture the opportunities. Secondly, biopharma. And thirdly, anything that goes toward green, sustainability, electrical vehicles, batteries and green technologies.


Q. With the economy suffering from the pandemic, the Korean government has set out a goal to create a million jobs.

A. The objective of the government to create one million jobs in 2021 is a high aspiration if we look at the numbers. The government should work with the private sector closely to see how to achieve it — the question is which industries. And at the same time, productivity in those industries has to increase. Secondly, besides quantity, quality of jobs is also very important, because in digital, especially, new skills will be required. Cyber security and data analytics require additional training.

We believe that up to 800,000 new jobs are needed in software engineering and data science in Korea by 2030.


Q. Can you compare the business environment in Korea and Japan?

A. Based on what I have seen, similarities outweigh [differences]. Number one, both countries are very strong in exports [...] therefore any trade disputes, for instance between the United States and China, impact those countries. Secondly, the industry mix is also similar overall. Thirdly, I was already impressed in Japan by the work ethic. I would say I am equally impressed or perhaps even more so here.

Next, there is collaboration and teamwork [...] and a very large pool of highly educated talent. I think the education systems are extremely stringent, but very high in terms of quality.

At the same time you see some of [the same] challenges. You see the aging population. Japan is leading here, and Korea is following. Also a challenge of "what's next?" as both countries caught up so fast after World War II. Lastly, in both countries there is always debate about lifelong employment versus employability.


Q. Japan restricted exports of semiconductor materials to Korea. Do you think Japanese companies agree with this measure or are they following the government's order?

A. I am aware of the conflict and I'm particularly aware because I am Austrian of Armenian origin, and there was a genocide in the first World War, so I understand the emotions there.

I think the government gives the regulations and companies have to follow — that is my understanding.

My hope is that there will be a resolution soon since both countries are dependent on trade and both countries now have to capture the opportunity post-Covid. You cannot change the past but you can shape the future.