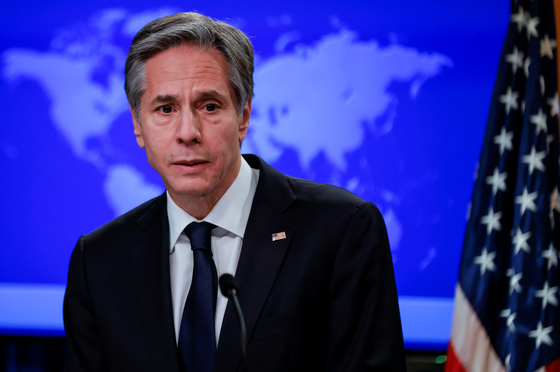 U.S. Secretary of State Antony Blinken speaks to reporters during his first press briefing at the U.S. State Department in Washington on Jan. 27. [REUTERS/YONHAP]

The Joe Biden administration is expected to hold accountable those responsible for human rights abuses or violations in North Korea, said a U.S. State Department spokesperson.

“As part of its North Korea review, the Biden-Harris administration will carefully consider the country’s egregious human rights record and how to promote respect for human rights in the closed country,” the spokesperson told the Voice of America (VOA) Wednesday under the condition of anonymity.

Washington remains “deeply concerned by North Korea’s network of political prisons, labor camps and systematic use of forced labor,” the spokesperson said, and continues to “work with like-minded partners to advance human and labor rights in North Korea and to hold to account those responsible for abuses or violations.”

The Biden administration has indicated it is putting human rights, an issue that has been often put on the backburner during the Donald Trump administration, at the center of its foreign policy.

The spokesperson also said that the State Department will "continue to work with our partners in the NGO [nongovernmental organization] community and in other countries to promote North Koreans' access to information.”

The remarks come amid recent criticism by the U.S. State Department, some American lawmakers and international human rights organizations over a controversial bill in South Korea banning the sending of propaganda leaflets across the border into North Korea, saying that it could hinder freedom of expression and efforts toward the dissemination of information.

The North Korea Leaflet Prohibition Act passed by the National Assembly in December last year stipulates a prison sentence of up to three years, or a fine of up to 30 million won ($27,000), for distributing items like leaflets, printouts, money or electronic storage devices to North Koreans or to North Korean territory, directly through the inter-Korean border or through a third country.

Seoul has argued that the anti-leaflet bill aims to defend the lives and safety of people living near the inter-Korean border. Defectors and human rights activists have often flown anti-Pyongyang leaflets across the border over the years, an issue which has been met by strong backlash by the North.

The report describes that, despite continued calls for accountability, “other political priorities with respect to the Korean Peninsula over the course of the reporting period have decreased emphasis by the international community on pursuing accountability for human rights violations” in North Korea.

It continued, “Accountability for human rights violations in the Democratic People’s Republic of Korea and ending the cycle of impunity are imperative, not only to pursue justice and deter future violations, but also to achieve sustainable peace and stability on the Korean Peninsula,” referring to the North by its official name.

The Moon Jae-in administration is planning on advancing its Korean Peninsula peace process initiative and is urging the Biden administration to build on the diplomacy started during the Donald Trump administration, but Washington has said it will start a review on its approach to Pyongyang from scratch.

U.S. Secretary of State Antony Blinken said in an interview with MSNBC Monday that North Korea’s nuclear buildup is “a problem that’s gotten worse across administrations.”

When asked what it would take for Biden to meet with North Korean leader Kim Jong-un, Blinken said that the U.S. president has asked him to “review the policy to make sure that we’re using the most effective tools to advance the denuclearization of the Korean Peninsula” and to deal with “the growing problem posed by North Korea’s arsenal.”

He mentioned the possibility of additional pressure on the North in coordination with U.S. allies, while leaving open a diplomatic approach.

Blinken added, “The first thing we’re going to do is review the policy across the board to look at what tools we have, including additional sanctions, especially additional coordination and cooperation with allies and partners, but also to look at diplomatic incentives.”

It is likely that Washington will push North Korea to resolve its human rights situation in the future negotiation process, analysts point out. Blinken during his Senate confirmation hearing last month also said the United States will consider ways to deliver humanitarian assistance to the North and not just focus on security matters.

Ryu Hyun-woo, a former North Korean acting ambassador to Kuwait who had defected to the South in 2019, told CNN Monday that the United States “can't back down from denuclearization,” while leader Kim can’t denuclearize because “North Korea’s nuclear power is directly linked to the stability of the regime.”

Ryu also said that it was important for the Biden government to place emphasis on human rights, “a sensitive and serious” issue in the North Korean regime and something the previous administration “greatly neglected.”