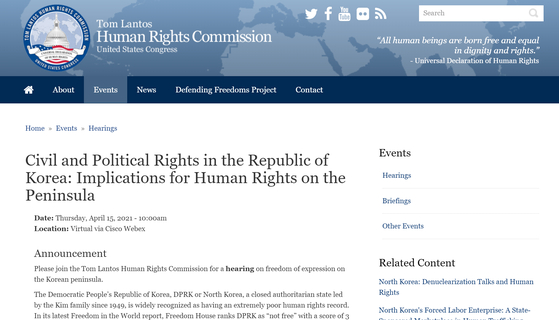 A screencapture from the Tom Lantos Human Rights Commission website announcing its hearing Thursday on the “Civil and Political Rights in the Republic of Korea: Implications for Human Rights on the Peninsula.”


A rare U.S. congressional hearing on South Korea's controversial anti-leaflet law will be held Thursday, which U.S. officials and human rights experts warn should not be underestimated by Seoul.

Phil Robertson, the deputy director of Human Rights Watch's Asia Division, told the JoongAng Ilbo in a written interview Tuesday that it is "both ignorant and foolish" for the South Korean government "to downplay the seriousness of this hearing."

The Tom Lantos Human Rights Commission, a U.S. bipartisan congressional caucus, is set to hold the hearing on "Civil and Political Rights in the Republic of Korea: Implications for Human Rights on the Peninsula."

The hearing will focus on South Korea's ban on flying anti-Pyongyang leaflets into North Korea, seen as a violation of freedom of expression by defector groups and rights organizations.

Robertson, a rights expert with a focus on Southeast Asia and the Korean Peninsula, said, "The South Korean government underestimates the Lantos Human Rights Commission at its own peril, because the panel is quite influential." 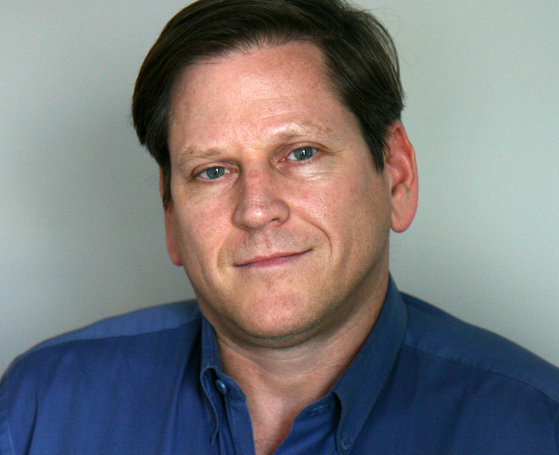 
It is unusual for the U.S. Congress to hold a hearing on human rights issues of an allied country, especially with South Korea being a constitutional democracy with free and fair elections.

The hearing comes as the United States signaled it plans to also hold North Korea accountable for its human rights violation, a message stressed during U.S. Secretary of State Antony Blinken's visit to Seoul last month.

Robertson said, "Seoul will likely see more pressure from Washington as a result of this hearing because the State Department recognizes it needs to be responsive to Congressional concerns," as lawmakers "are responsible for appropriating ministry budgets."

Korean President Moon Jae-in, he added, "has mishandled the anti-leaflet law from the start, betraying his origins as a human rights lawyer by passing a law that blatantly violates freedom of expression and association, and seriously impinges on the right to peaceful, public assembly of North Korean protest groups."

Robertson continued, the Lantos commission "serves as an incubator for human rights policy and Congressional action on rights."

It is comprised of senior members of Congress, he added, and what they learn at hearings is "often used in drafting other legislation, and pressuring the State Department and White House to adopt human rights policies."

The hearing will be led by the co-chairs of the commission, Republican Rep. Chris Smith of New Jersey and Democratic Rep. James McGovern of Massachusetts.

McGovern serves as co-chair of the Congressional-Executive Commission on China, a body which forms Beijing policy. He also chairs the Rules Committee, which Roberson said "is arguably the most powerful committee in the House because it determines what legislation gets to the floor of the house, and the rules for the ensuing debate."

Smith, said Robertson, is "one of the most senior Republican congressmen with core expertise in foreign policy."

The witnesses for the virtual hearing Thursday include rights experts from organizations including the Human Rights Watch, the North Korea Freedom Coalition, Conciliation and Peace Society and Quincy Institute for Responsible Statecraft, and Lee In-ho, a former Korean ambassador to Russia.

The commission contrasts North Korea, an authoritarian state, with South Korea, a constitutional democracy, in what could be a message on the Biden administration's push for addressing human rights issues.

Robertson described South Korea's anti-leaflet law as "ridiculous" and "rights abusing," and said, "The free ride that South Korea got on human rights from the [Donald] Trump administration is over."

He said the two congressmen are "formidable actors on U.S. foreign policy," adding that "to somehow belittle or downplay their influence — as the [South Korean] Ministry of Unification is obviously trying to do — is not very wise at all."

A Unification Ministry deputy spokesman last Friday downplayed the U.S. congressional hearing, saying that the Tom Lantos Commission has no voting power and that the nature of its hearings are considered closer to a "policy research panel."

In response to the backlash, Unification Ministry spokesperson Lee Jong-joo clarified in a briefing Monday in Seoul that the deputy spokesman's remarks "did not represent the government's official stance" and that he had only "relayed several opinions expressed by experts."

Lee added that the government "does not make assessments on the nature of congressional committees of the U.S."

The amendment to the Development of Inter-Korean Relations Act, passed by the South Korean National Assembly last December, went into effect last month. The revision stipulates a prison sentence of up to three years, or a fine of up to 30 million won ($27,000), for distributing items like leaflets, printouts, money or electronic storage devices to North Korea through the inter-Korean border.

Seoul has argued that the anti-leaflet act aims to defend the lives and safety of people living near the inter-Korean border, while defectors and human rights activists have said the new law could hinder efforts toward the dissemination of information into the North.

Rights activists have expressed concerns that the law could interfere with efforts to promote human rights in North Korea, including programs funded by the U.S. government, such as the dissemination of information on USB drives.

A U.S. State Department spokesperson told the Voice of America Wednesday, "We respect the fact that [South Korea], as a democracy with an independent and strong judiciary, has tools in place to allow for review of the law."

The spokesperson stressed that Washington expressed "strong views about the importance of the free flow of information into the DPRK and freedom of expression," referring to the acronym for the North's official name, the Democratic People's Republic of Korea.

The Biden administration as a global policy has advocated for the protection of human rights and fundamental freedoms.