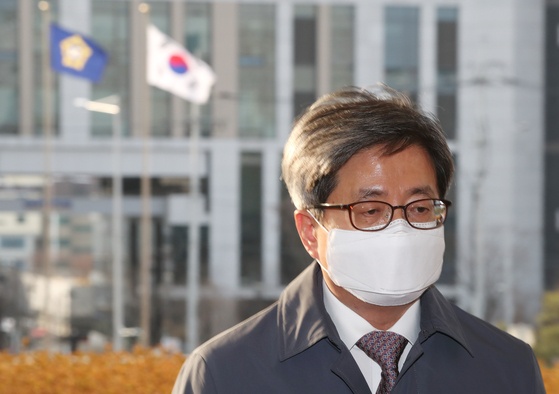 
Classmates of the first sitting judge to be impeached by the National Assembly called for Supreme Court Chief Justice Kim Myeong-su to be ousted for betraying the judiciary's independence.

A group of 140 law professionals admitted to the Judicial Research and Training Institute with Lim Seong-geun in 1986 also condemned the ruling party and its allies for impeaching Lim to tame the judiciary.

The ruling Democratic Party (DP) and its allies on Thursday impeached Lim, a judge on the Busan High Court, for meddling in politically sensitive trials during the previous administration. It was the first time in the country's modern history that a sitting judge was impeached.

The impeachment resolution was sent to the Constitutional Court on Thursday for a trial.

"The unprecedented impeachment against a sitting judge took place on charges for which he had already been acquitted in a criminal trial," the statement said. "The ruling party and its allies heinously wielded their majority [in the Assembly]."

"We do not condone what Lim did, but his wrongdoing was not serious enough to deserve impeachment," the statement continued. "The impeachment was an attempt to tame the judiciary and serve the political purpose of strengthening the ruling party's powers. It was an unconstitutional abuse of power that violated the independence of the judiciary."

The law professionals went on to demand the impeachment of Supreme Court Chief Justice Kim, whose role in Lim's impeachment came into the light this week. "As the head of the judiciary, he should have protected judges," the statement read, "but he actually abandoned Lim to face impeachment."

"Kim gave up the independence of the judiciary because he was too eager to placate politicians," they said. "His action is a disgrace."
Hours before the legislature's vote on his impeachment, Lim made a bombshell revelation that Chief Justice Kim stopped him from stepping down last year so the ruling party could impeach him later. The revelation did not stop the lawmakers from passing the motion.

On Thursday morning, a lawyer representing Lim released an audio recording and transcript of a conversation between Lim and Kim on May 22, 2020. On the recording, Kim said he personally had no problem with Lim resigning, but the political situation forbid him from accepting it. "Frankly speaking, lawmakers are making a fuss to impeach you," Kim said. "What will the National Assembly say to me if I accept your resignation?"

He also said in the recording that, "If I just accept your resignation today to prevent them from talking about impeachment, it will deprive them of a chance to discuss the issue of impeachment. It is extremely inappropriate for me to face such criticism."

Incumbent judges also condemned Kim. "The Constitution guarantees the freedom of vocation, so working as a judge and stepping down from the post is a basic right," Judge Yun Jong-gu of the Seoul High Court wrote in a statement posted on the intranet of the judiciary. "To restrict that right, you must have a constitutionally valid reason."

Judge Jeong Wuk of the Daegu District Court posted a message on Thursday imploring members of the judiciary to avoid being used by politicians. "Outside political forces are trying to control the judiciary by labeling some judges who do not seem to support them as foes," he wrote.

Lawmakers from the main opposition People Power Party (PPP) visited the Supreme Court on Friday and had a meeting with Kim. 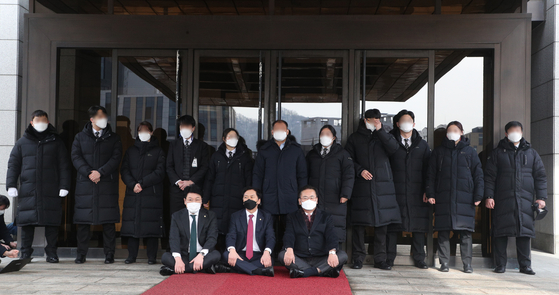 Lawmakers of the People Power Party stage a sit-in at the main gate of the Supreme Court after they were stopped by the court security troops from entering the building to meet with Supreme Court Chief Justice Kim Myeong-su. [NEWS1]

"Our party believes Kim is unfit to serve as chief justice of the Supreme Court, so we pressured him to step down during the meeting," said Rep. Kim Gi-hyeon of the PPP said. "He, however, refused to do so."

Some civic groups and law students also issued statements on Friday to demand Kim step down.