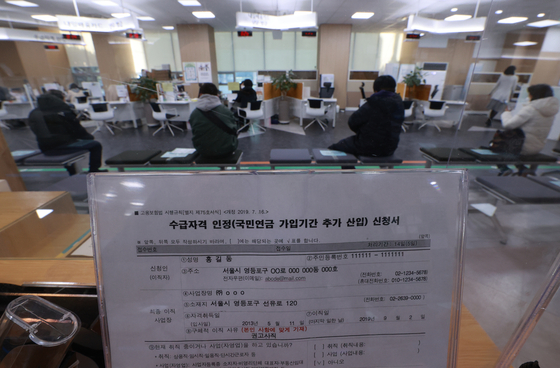 People wait at a job center in Yeongdeungpo District in western Seoul on Feb. 3 to apply for unemployment benefits. [YONHAP]

Over 14,000 people claimed unemployment benefit multiple times last year, according to a report released by the office of Rep. Yoon Jun-byeong of the Democratic Party, a sign of abuse of the system — but not in an illegal way.

The main scam is when a person takes a job on a six-month contract and quits to become eligible for unemployment — and then does the same thing a few weeks later.

According to Yoon’s office last week, a total of 66.7 billion won ($59.3 million) was doled out from January to November 2020 to people claiming benefits multiple times.

“There are a lot of people who work short-term contract jobs and constantly receive unemployment benefits,” commented a person on an online bulletin board frequented by office workers. “Some intentionally quit their jobs after a certain period of time, so I feel scammed [as a business owner].”

From January to November 2020, some 22.2 billion won of benefits paid can be considered questionable, and the figures for 11 months were already larger than for all of the previous year. Government crackdowns in 2016 and 2017 led to record levels of transgressors caught.

Unemployment benefits are given for four months to an employee who worked at a workplace for over 180 days and lost the job. The minimum payment is 60,120 won per day, a 29.1 percent increase from the amount in 2017.

Since there are no restrictions to the number of times one can apply for unemployment benefits, there are criticisms of the system as a whole.

“Who would work if you can get paid for doing nothing?” said a member of an online community.

Analysts say there should be limits on the number of times a person can apply for the benefits, and stricter requirements to receive them.

“There are concerns that the employment insurance fund will run out,” Yoon said. “The fund should be managed strictly, so that only those who need the benefits will receive them.”

“If a small number of people abuse this fund, then other people’s use will be limited,” said Cho Joon-mo, an economics professor at Sungkyunkwan University.