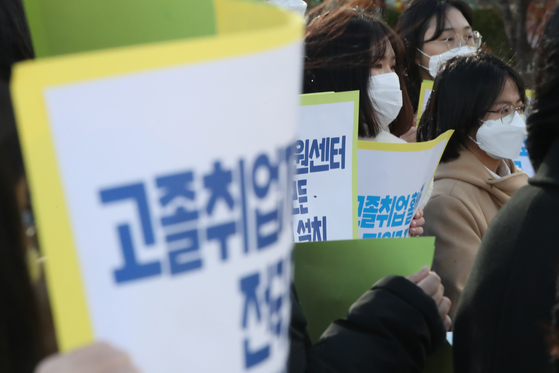 A civic group demanding the government to come up with plans that would help increase jobs for high school graduates in front of Yongsan station on Sunday. [YONHAP]

Monthly unemployment benefits fell below 1 trillion won ($897 million) for the first time since May.

According to the Employment and Labor Ministry on Monday, 994.6 billion won of unemployment benefits were paid in October.

While this is a 13 percent increase year-on-year, it is the first time that the monthly unemployment payout has fallen below 1 trillion won in five months.

The growth rate of unemployment claims is slowing. Last month, 88,000 people filed for unemployment checks, which is a 6 percent increase year-on-year.

The growth in unemployment applications has been in the double-digits since March. That month, the number of people filing for unemployment checks surged 24.6 percent year-on-year and peaked in June, when the growth rate hit 40 percent.

The year-on-year increase seemed to be settling down in July and August in the mid-10-percent range before rising against to 39.4 percent in September.

Between August and September, the government implemented its toughest social distancing measures, which affected many small shops.

“It seemed the government’s easing on social distancing has had an impact,” said Kwon Ki-seop, head of the Employment Ministry’s employment policy.

In October, 393,000 people started subscribing to employment insurance compared to a year ago.

However, among the newly added, 77 percent were hired for public and health and welfare jobs.

The impact of the coronavirus on businesses most vulnerable continued.

Employment insurance subscribers working in restaurants and hotels shrunk 22,000 last month, while in manufacturing they fell 45,000. This was an improvement from September’s 51,000 drop.