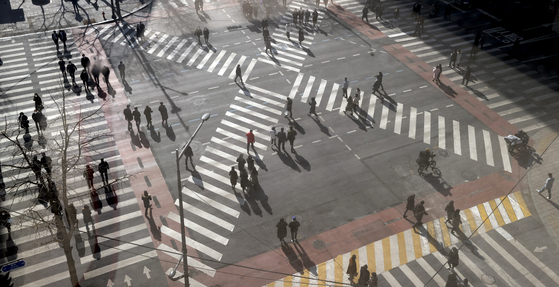 Seoul citizens get out for lunch in small groups on Jan. 20 according to the government's ban on gatherings of five or more people. [YONHAP]


Data from mobile carrier KT show that the government’s ban on gatherings of more than four people may actually have been effective in limiting the spread of Covid-19 in Seoul during the holiday season.

For the study, KT studied foot traffic in Seoul over the past year using its telecommunication data and mentions of the keyword “corona” on social media.

From Dec. 23, the Seoul government banned gatherings of five or more people.

KT’s conclusion that the measure was effective was drawn from the fact that four days before the Dec. 23 announcement, foot traffic had bounced up for the first time since late November. That short rebound immediately stopped as foot traffic drastically fell from the Dec. 23 announcement. The number of confirmed Covid-19 cases also started to fall shortly after, after peaking in mid-December.

“Data show that the government’s decision came at just the right time as foot traffic was about to increase at the year’s end — this in turn resulted in slowing down confirmed cases,” KT said in a statement.

Comparing foot traffic and the number of confirmed cases, KT also noted that Seoul citizens voluntarily stayed home after seeing the spread of the pandemic. The Korean government had escalated social distancing measures to Level 2 from Level 1 on Nov 24.

But foot traffic took a drastic downfall from mid-November, shortly after the number of confirmed cases started to rapidly increase. After breaking the 200 daily confirmed patients on the 14th, November figures shot up to surpass 500 by the month’s end.

The mobile carrier also said it found signs that Seoul citizens were growing tired of the social distancing measures and the ongoing pandemic: Unlike the first massive outbreak in March and the second in August, the foot traffic decline for the third large-scale spread in November was slightly slower than the previous two instances when people reacted much faster to the increase in confirmed cases.

As for reactions on social media, the number of posts including the word “corona” had greatly fallen during the third outbreak, compared to March and August when reactions were immediate and much larger. KT’s interpretation of this data trend was that Seoul citizens had become accustomed to living in a pandemic and grown tired of the subject in general.

“The extension of the Covid-19 pandemic calls for careful measures that consider both complaints of citizens and boosting the economy,” said Kim Hyoung-wook, KT’s executive vice president who heads the future value task force. “KT will consider offering valuable data to contribute to Koreans’ safety.”