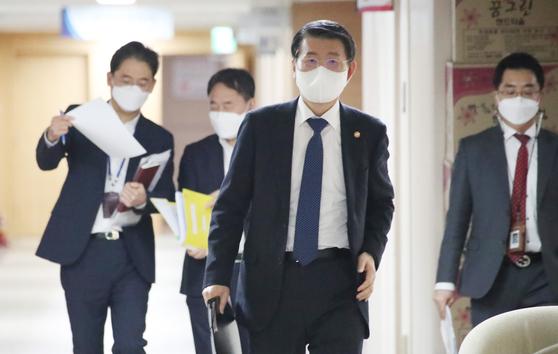 Financial Services Commission Chairman Eun Sung-soo walks the hall before announcing the decision to ban short selling until May on Feb. 3 in Seoul. [YONHAP]

The role of foreign investors in the local market is a hot topic as indexes hit new peaks and short-selling becomes a global issue.

With economies flooded with liquidity, share prices are rising fast, the Kospi breakking 3,000 for the first time ever on Jan. 7. The index has since been moving between 2,900 and 3,100 strongly backed by retail investors, while international investors have been net sellers.

The FSC said profit taking may be a reason. The regulator also said that the bull attack on New York Stock Exchange-listed GameStop may also have played a role in the caution on the part of foreign investors.

The GameStop storm may also have influenced Korean regulators in their decision to only partially lift the prohibition on short selling of local stocks.

While the Financial Services Commission (FSC) in January said it will lift the ban on short selling, which had been in place since last March, it did extend the ban for another two months and is only allowing the short selling of Kospi 200 and Kosdaq 150 stocks once the ban is lifted.

That’s 22 percent of 917 Kospi shares and 10 percent of 1,470 Kosdaq shares. The prohibition on the short selling of the 2,037 stocks will continue without a specific end date.

The FSC chairman noted that Korea is the only “advanced” country that has banned short selling, adding that the continuation of the ban could affect Korea’s position on the Morgan Stanley Capital International (MSCI) index.

MSCI could cut the country’s weight on the emerging markets index, which could trigger foreign investors to sell shares.

Korea is currently at 13.3 percent of the index, one of the top three, while China tops the list at 40.13 percent.

If that portion is cut, foreign investment could be cut.

According to the Financal Supervisory Service (FSS), foreign investors hold 787.9 trillion won of Korean shares as of January, which is 31.6 percent of all stocks on the Korean equity market.

“To prevent the outflow of passive capital, short selling is necessary,” said Seol Tae-hyun, a DB Financial Investment analyst. “The MSCI and FTSE determine a market grade on whether short selling is allowed or not.”

The analyst said due to the massive investments by the funds tracking the index, there would be more losses than benefits if the suspension on short selling is extended indefinitely or if short selling were banned entirely.

The day after the FSC announced extending the ban on short selling for another two months, foreign investors, who net bought for three consecutive days, offloaded shares worth 600 billion won.

Bauer said while it is important to protect retail investors and have a leveled playing field, “an outright ban on short selling on those grounds is a very blunt instrument to address this concern,” warning it could harm market efficiency.

Eugene Investment said the partial lifting by FSC in May is the same as lifting the ban entirely.

Foreign investors have a thing for Korean bonds