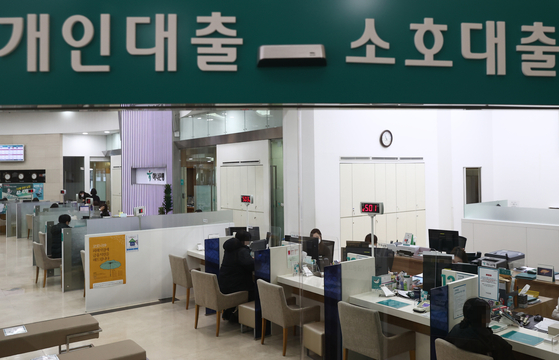 Consumers inquire about loans at a bank in central Seoul. [YONHAP]

Banks have been closing offline branches to cut costs as more people use online and mobile banking services, especially after the spread of the coronavirus.

The financial watchdog said in a statement that while it is inevitable for banks to reduce brick-and-mortar branches considering the rapid digitalization in the banking sector, closing offline branches could be a big blow to elderly customers, especially in non-metropolitan areas.

To better serve customers that aren't used to digital banking, the FSS said it will make it harder for banks to close branches from March.

Banks will have to carry out an assessment on the effects of closing down an offline branch before making the decision. Each bank's customer protection department will participate in the assessment, alongside outside experts.

If it is found that a branch's operation should be maintained, the bank will need to consider downsizing the branch, rather than completely closing it down.

The FSS said it will also come up with alternative ways to improve elderly people's access to banking, such as operating automated teller machines, encouraging banks to partner with other banks to offer multiple services at one branch, operating regular mobile offices that open once a week, or operating very small branches with only one or two employees.

The FSS will also better notify customers if a branch is closing down. While notification messages are currently sent a month before a branch closes, a warning will be given three months in advance.

Shame on the FSS